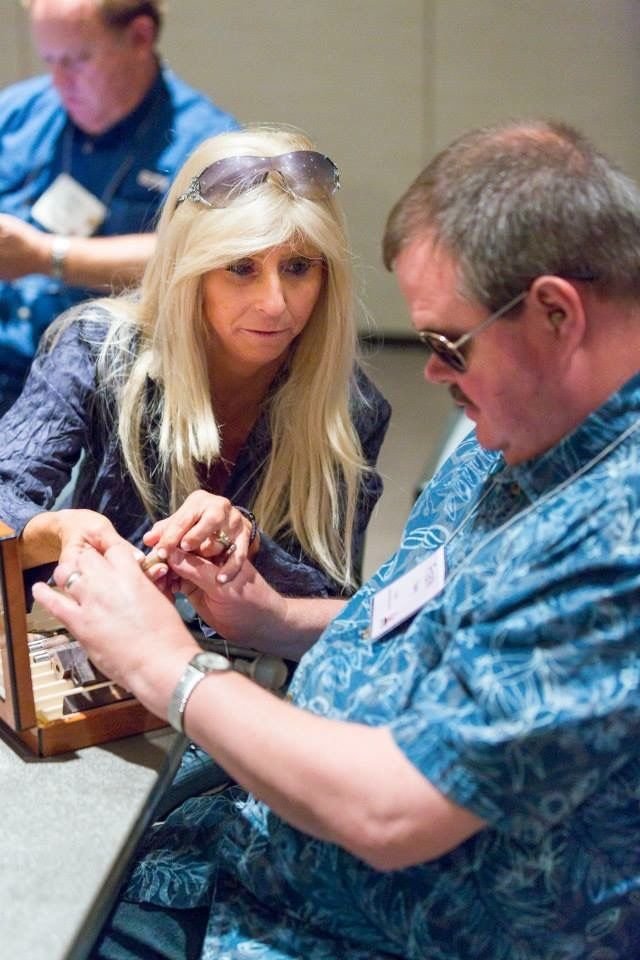 Andi Sullivan explains pen turning to Frank Vance during a Lighthouse for the Blind session at the 2014 American Association of Woodturners Symposium in Phoenix, Arizona. He is now manager of the Arizona program. (Photo by Andi Wolfe)

“When you have challenges or disabilities, the world becomes a lot smaller. Woodturning opens it up. You come out with a pen or a key ring. It gives you confidence. It empowers you. You think, ‘If I can do this, I do something else too.’”

Andi Sullivan speaks from personal experience. In addition to a genetic condition called cornea dystrophy, she has survived three strokes—the last one rendering her blind—and lives with a heart condition and lupus. Told she would never walk again, she went into the pool every day and did rehabilitation until she was able to walk.

In 2010, Andi discovered woodturning and that has changed her life. Andi and her husband, Dr. Allen Miller, attended the 2010 American Association of Woodturners (AAW) Symposium in Hartford, Connecticut. As Allen described the wood pieces on display—no touching was permitted—Malcolm Zander, a Canadian turner, rushed up to her with one of his wood creations and said, “You can hold my piece.”

Andi was so inspired by that experience that she decided she wanted to learn woodturning. She contacted Kurt Hertzog about a class he was going to teach at the Arrowmont School of Arts and Crafts, and although he had never taught a blind student he agreed to try.

“I was the first blind student accepted at Arrowmont, with a lot of controversy. I was Andi, the blind turner. They were waiting to see if I would have all my fingers after the first week. Now I am just Andi, the woodturner. I feel like I have arrived,” Andi said.

Because learning woodturning meant so much to her, Andi felt that she should help others have the same opportunity. Despite the initial response, “You can't do this; it’s never been done,” Andi persevered.

“With the help of my husband Allen, good friend Malcolm Zander, and the AAW, I was asked to speak at an AAW convention and coordinate an event with the blind. After many calls to the director for the blind school in Tampa, they reluctantly decided they would try a Blind Woodturning Program. You can imagine what their clients thought when they found out their teacher would be me. So we literally had the blind leading the blind. I am so grateful that they took that leap.”

Andi is still teaching in the Lighthouse of Tampa program that was established in 2013 and has involved nearly 1,000 participants. Her instruction is incorporated into a 6-8 week training session on how to survive being blind.

When asked “How does a blind person learn to turn”, Andi said, “With a lot of work with the lathe turned off. Practice on it. Then turn it on. And always have a guide.” 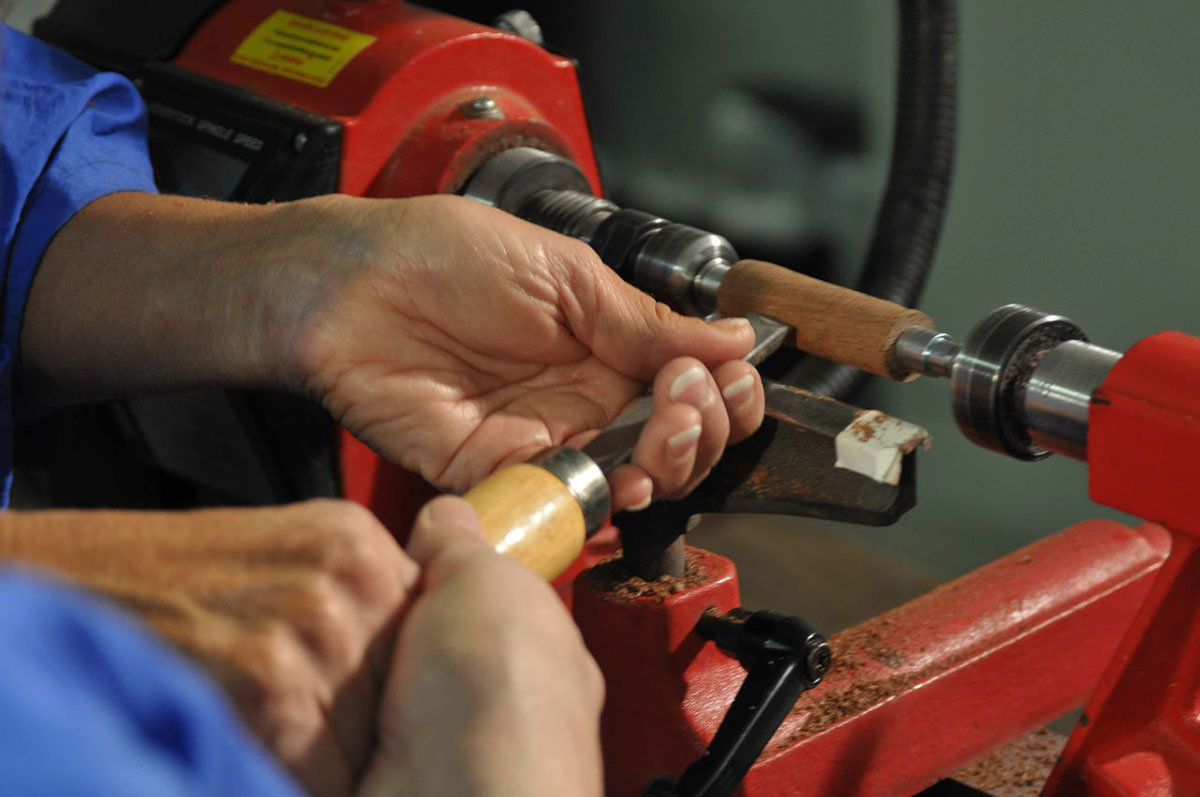 A guiding hand helps position the turning tool during a class at the Lighthouse for the Blind program in Tampa. (Photo by Carl Brown).

The successful launch of the Tampa program led the way for Andi, Malcolm Zander and the AAW to begin establishing turning programs with blind schools and organizations in cities that hosted AAW Symposiums -- Tampa, Phoenix, Pittsburgh, Atlanta, Kansas City, Missouri, and Portland, Oregon, in 2018.

In June, Andi and her team of volunteers taught the sixth Lighthouse for the Blind turning session during the 2018 symposium. The turning session was actually the kickoff for the new woodturning program established at Oral Hull Park recreational facility for the blind outside Portland. Twenty-three adults, most of them visually impaired but a few with other physical challenges, were able to make a pen to take home. The first class at Oral Hull Park was scheduled for July 31, with one of the symposium participants among the instructors.

When Andi first taught turning to the visually impaired at the symposium, it was during the lunch time when the Youth turning area was not in use. Her program has grown, and for the past two years, she has been given her own time slot.

Andi begins planning for a symposium program a year in advance, identifying a local blind program or school that serves the visually impaired to set up a turning program that will remain after AAW members have gone home. One of the 26 turning packages donated by the sponsors, including Woodcraft, is given to the local program after the symposium.

Andi keeps track of all the programs that have been launched at the AAW symposiums. “I call everybody every so often,” Andi said. “If they have a snag, we work it out. The program is totally volunteer. We depend on AAW chapters for support. They are a point of contact.”

The schools have grown so much that Andi is hoping to get a corporate sponsor to pay for the approximately $1,500 a year that it costs to provide supplies for all the programs.

“I need a reason to get up every morning, and the schools have given me that reason,” Andi said. “I never quite understood what my purpose in life was after becoming blind, but now I truly do see. The schools have so far helped over 700 students and have given them a renewed sense of accomplishment. School is so much more than woodturning. It is a lesson in believing in yourself.” 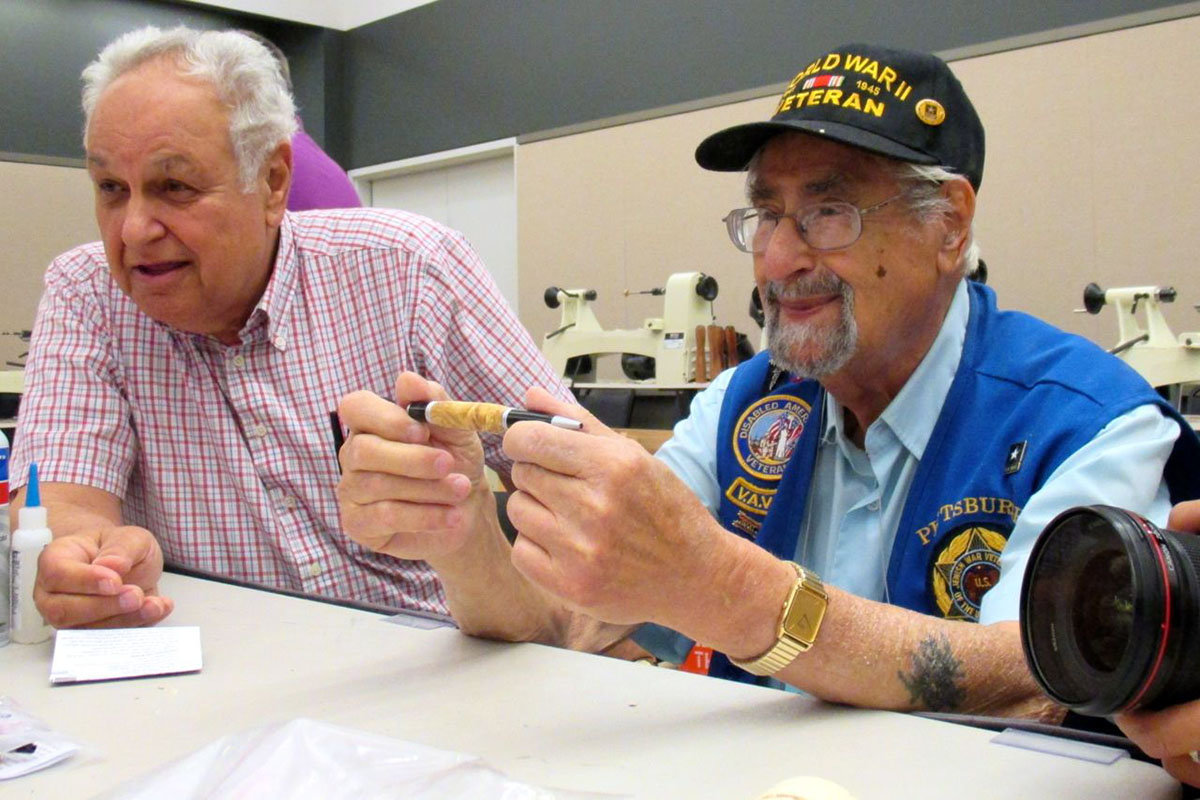 “As the woodturning population is aging, we need to find solutions to keep doing the things we love to do. It’s all about the audience. The last 45 minutes they can ask questions, and we help them find answers. We customize what is going on to those who are there.”

Andi is especially excited about the 2019 AAW Symposium in Raleigh, North Carolina. “I am going to be the first blind teacher to teach the youth at the symposium next year – pens and key rings,” she explained. “My husband and I will also teach kaleidoscopes. We’ve been practicing about a year. I am so excited. I am always trying to break through some kind of ceiling.”