Home Articles Woodworking: A Silver Lining in My ALS Cloud

Woodworking: A Silver Lining in My ALS Cloud

If anyone lives by the motto “No white flags,” it’s Dave Clarke from Sandy, Oregon. A retired firefighter and mountain rescue volunteer, Dave was diagnosed with amyotrophic lateral sclerosis (ALS, also referred to as Lou Gehrig’s disease) in 2018. Once an avid skier and cyclist, Dave said his balance, gait and speech have mostly been affected by the disease so far. But every cloud has a silver lining and Dave’s was the push to revisit a long-postponed hobby: woodworking. 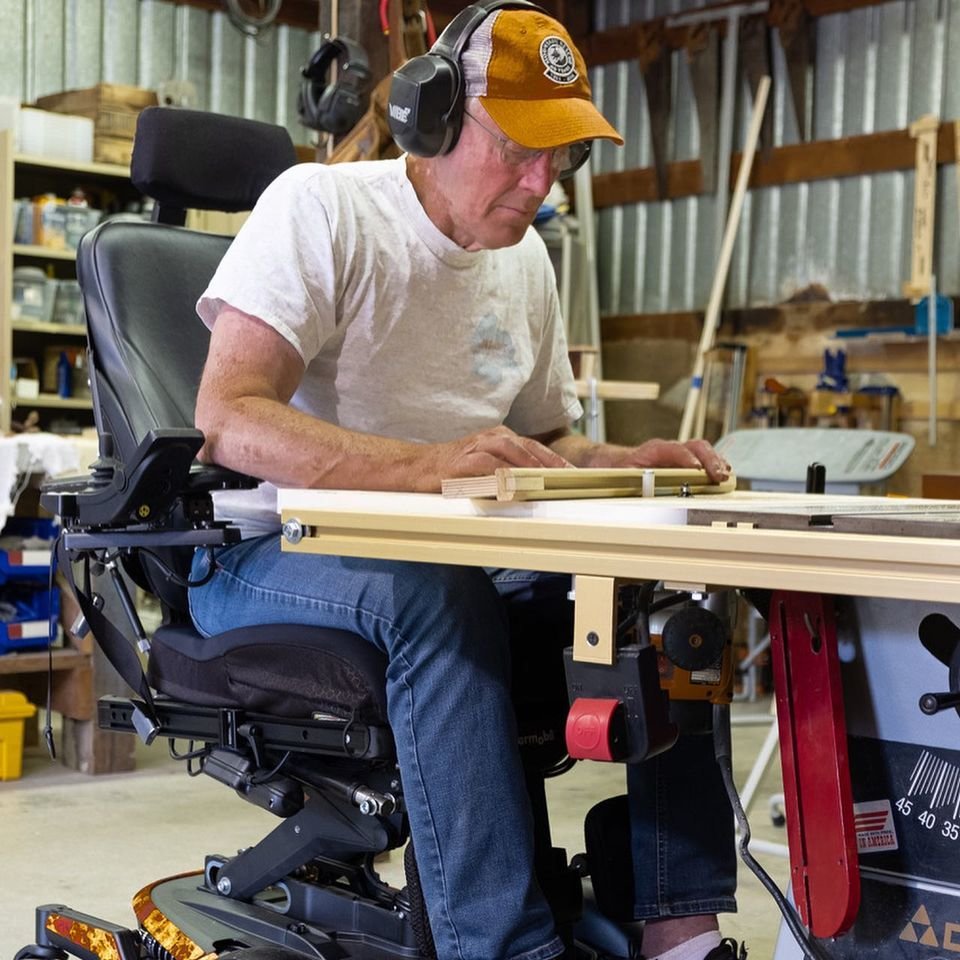 “No white flags” comes from Steve Gleason, a former NFL football player with the New Orleans Saints, who was diagnosed with ALS in 2011. Gleason and his wife Michel formed The Gleason Foundation in an effort to bring ALS to the forefront and to provide inspiration for patients to not only live, but thrive, after their diagnosis.

Dave’s wife Laurie says this motto describes him to a tee. “That’s Dave all the way. He has no shortage of gumption, and the ability to persevere no matter what. He’s also darned stubborn.”

As a kid Dave said he learned a lot from watching his father work on their house. “He got me a small workbench, let me use his tools and encouraged me to build things on my own. I’ve used and improved those basic skills over the years, mostly with remodeling our house, but with a few projects that could be considered more woodworking than carpentry,” he said.

Though Dave doesn’t feel like he ever stopped woodworking, it certainly took a backseat to his other avocations like skiing, cycling and volunteering for mountain rescue. ALS has taken his ability to do those things now, but it opened up time for him to focus on woodworking. “My mom always said that every cloud has a silver lining. So I see woodworking as the silver lining to the ALS cloud.”

“I’m happiest when I learn a new skill that I can use on a project,” he said. “I also like using old tools and I’ve got a few that belonged to my great-grandfather.” He even has a set of chisels that say “Woodcraft Supply, Woburn, Mass.”

ALS kills both upper and lower motor neurons that control the voluntary muscles, and it does so in an unpredictable order, Dave said. “I don't know what functionality I will lose next, but eventually it will take away all of my muscle control, even my ability to breathe.” But Dave doesn’t let those thoughts stop him.

In his day-to-day life, the chair takes him everywhere he needs to go, and because he doesn’t have to struggle with a walker or manual chair, he has more energy for important things like holding his new twin grandbabies or building their cribs. In the workshop, he has made adjustments where needed, including rearranging machinery for wheelchair access.

After his ALS diagnosis, Dave rearranged his workshop to allow wheelchair access, and uses his “elevator” to safely and effectively use tools and machines that would be out of reach in a standard chair.

Dave and daughter Annie built a pair of cribs for twin grandchildren born in April to Dave’s son Dale, who also helped with the build. “A great project that allowed us to spend time together while creating a family heirloom.”

The Gleason Foundation has lead the charge in innovative assistive technology, like Dave’s Permobil seat elevator that allows him to reach tools and machines that are out of reach in a regular wheelchair. “Currently I can stand, but my balance is so bad that I have to hold on to something. I’ve also lost some of the dexterity in my hands and I fatigue easily. So I use a power chair to conserve my energy, and I’m using power tools more and more because they don’t require as much fine dexterity.”  The elevating feature lets him sit while using the table saw, router table, drill press and some of the bench work.

“The elevator really increases my ability to do so many things both in and out of my shop. It is also great in social situations (remember when we used to socialize?) because it gets me to the same level as people who are standing,” Dave said. “The Gleason Foundation realized what a benefit this is for people living with ALS and established a grant program to fund it.”

As Dave’s ALS progresses, he may need to make other shop adjustments. “That’s the $64 question. I’m dreading the day when my dexterity gets so bad that I have to quit working with sharp pointy tools. I also want to organize my shop better so that friends and family can bring their own projects here to work on and be able to find the tools and supplies they need. Other than that, I hope to be able to creatively overcome or work around whatever functional loss ALS has in store for me.” As they say, no white flags!

Laurie has mixed feelings about Dave being in the shop. She worries about accidents or the cost of him getting tired or too cold. But she says, “I am in awe of what he is able to accomplish, and I’m so proud of him.” 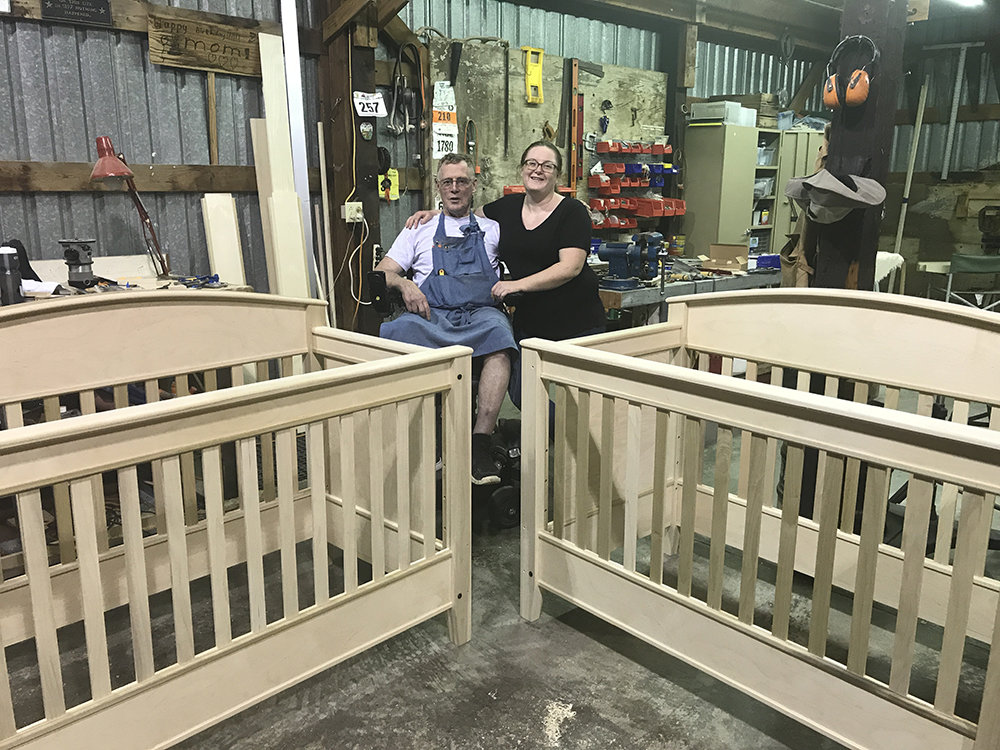 Two special gifts he built this year were a pair of cribs for twin grandchildren born in April to son Dale and his wife Jaime. Dale helped with the build, along with Dale’s daughter Annie (pictured above). Dave said the build was “a great project that allowed us to spend time together while creating a family heirloom.”

He is still finishing the cribs —“Did I mention that I've always been slow to complete projects and ALS has exacerbated that”— but he has a few more things on his to-do list. “Hopefully I’ll be able to make some Christmas gifts. Whatever the next projects are, they will definitely be smaller than the cribs!”

Dave’s favorite things to make are gifts that will be cherished. His all-time favorite gift is a pair of interlocking hearts that he whittled for Laurie.

Not only has woodworking been Dave’s silver lining in the ALS cloud, he also feels like his family has been blessed. “I think that we have always been close and are even more so now. But our ‘roles’ have changed. I’m much more needy and I can’t contribute like I used to. Everyone has really stepped up to help, which I really appreciate, and it’s something that we can all take pride in.” 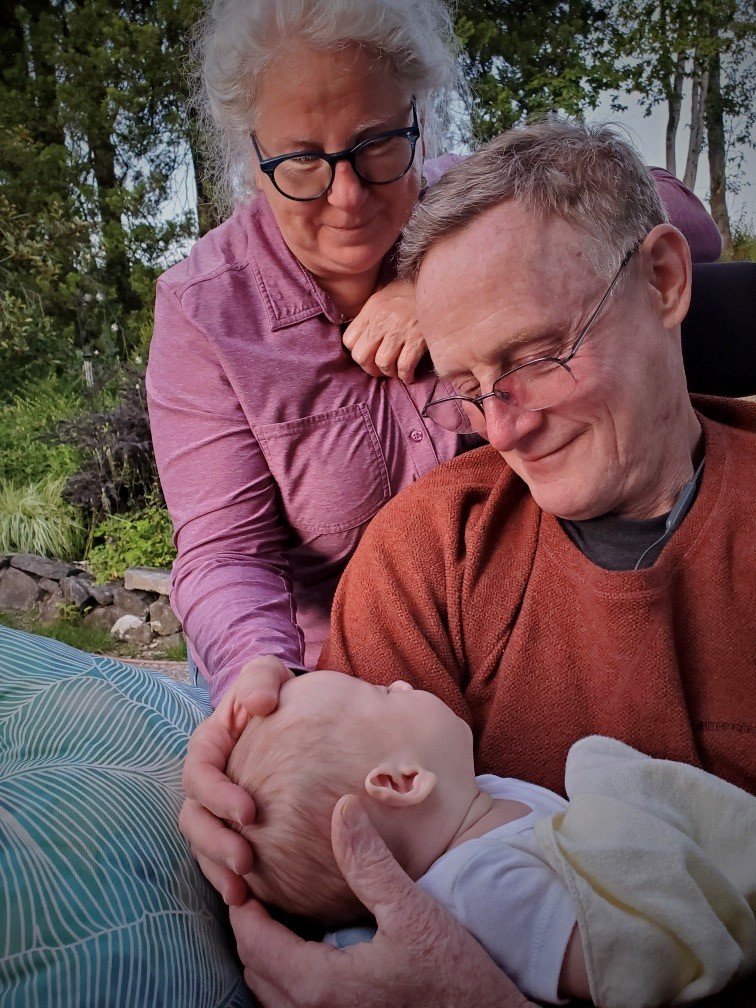 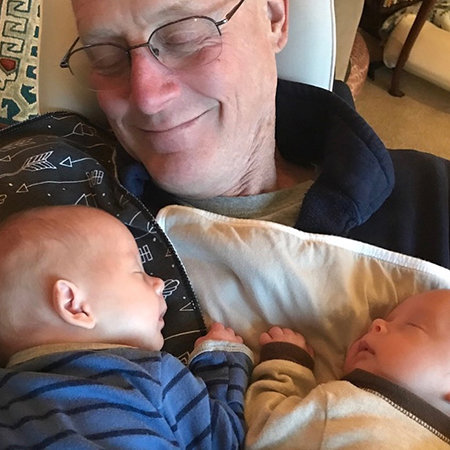 His wife Laurie, in particular, inspires him. “Laurie has been so courageous as a caregiver. She is always researching ways to deal with the next ability that I’ll lose to ALS. She maintains a positive outlook and together, we make the best of our situation.  I’m so lucky to have her by my side.”

Clearly there are “no white flags” being throw by this family. Although baby snuggle breaks are strongly encouraged.

All photos by Laurie Clarke.

We asked Dave to take a look at an article Woodcraft Magazine published in Issue 44 by Pete Stephano – “The Wheelchair Woodworker Shop” – to see if he felt that the recommendations were still relevant and if he had any other advice for folks wanting to set up a workshop with modifications. You can read that blog here: “Another Look at the Wheelchair Workshop.”

You can also read how Mike Dils, who considered woodworking to be his best therapy, adapted his workshop in “It Ain’t Over Til It’s Over.”

We hope you’ll be inspired!