This article is from Issue 107 of Woodcraft Magazine.

Not well known, but vaguely familiar. Sassafras’s grain and coloring are similar to several other species, especially ash (right). If in doubt about what you’re purchasing, scratch and sniff. Sassafras has a distinctive spicy odor.

A handsome, yet unpretentious species with a lot to offer

While sassafras may not have the panache of quartersawn white oak or the rich color of black walnut, the humble wood is still worthy of consideration. It’s relatively lightweight and straight-grained, and it holds up well outdoors. The wood is also easy to work, stable, and inexpensive compared to its flashier competition. What’s not to like? As a bonus, sassafras, also known as cinnamon wood, gives off a distinctive spicy but pleasant aroma when cut or sanded. Its coarse grain structure is similar to ash and chestnut. It ranges in color from an olive golden-brown to a darker reddish-brown with lighter sapwood. 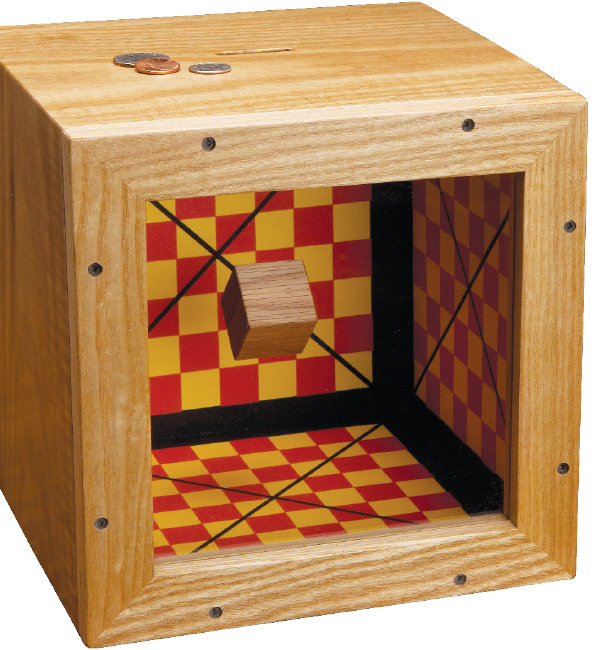 Supporting role. Sassafras is a good choice for projects where the wood doesn’t have to be the star of the show. It’s handsome without craving attention.

Sassafras (Sassafras albidum) is native to the eastern United States. While the trees can reach significant size—up to 100' tall and 4' in diameter in parts of the south—throughout much of their range they tend to be scrubbier hedgerow trees. Thus sassafras lumber tends to be narrower and shorter than many other species. Most boards range from 4 to 9" wide and 8-12' long. It is generally available in 4/4 and 8/4 thicknesses for under $5 a board foot. The trick is actually finding a dealer that stocks it. While far from rare or endangered (the species is not listed on either the CITES or IUCN Red List), there simply isn’t that much demand for sassafras, so not many lumber yards carry it. Sassafras veneer is occasionally available online, and sassafras plywood is even rarer.

Sassafras has a storied history, but not so much for its wood. In colonial times, the bark and roots of sassafras were boiled to extract their “medicinal” qualities. The benefits were believed to cure everything from headaches and rheumatism to diarrhea and syphilis. But before you rush to brew up your own cure-all cocktail, realize that sassafras does none of these things, nor will it make you taller or better looking. These dubious claims, however, caused sassafras to be a leading export back to Europe for several years. Such lore also led the wood to be a popular choice for bed frames as it was believed its aroma would keep away bedbugs and other nocturnal critters. More legitimate uses included barrels for dry goods, gates and fencing, and small boats. Today, antique restorers seek it out as a chestnut substitute. In fact, a lot of sassafras is exported to Europe for just such purposes.

Sassafras is delightful to work with. It is soft enough to cut easily with hand tools, and it machines well. However, the wood is slightly brittle and prone to splintering and tearout, so pay close attention to grain direction when surfacing. It holds fasteners well, but be sure to predrill to avoid splitting. The wood stains and finishes readily and requires no special preparation for glue. As for bending, the jury is still out. I haven’t tried it myself but my research yielded several sources that say it bends well, and several that say it doesn’t. When I get a chance to try bending some, we’ll post an update. 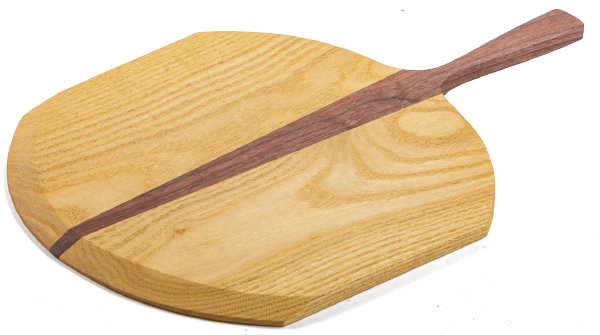 A study in contrast. The lighter color of the sassafras contrasts handsomely with the dark rich walnut. A coat of mineral oil brings out the colors in both woods nicely.

I am always amazed at the power of smell to trigger memories. The last time I used sassafras was over ten years ago when I made the magic coin bank (facing page). But as soon as I made my first cut for the pizza peel (shown below) it seemed like I had just finished with the bank yesterday. Working with sassafras again made me wonder why I don’t use it more often. It truly is a pleasure to work.

Making the peel was straightforward. After milling the stock to thickness, I edge-glued the two sassafras blanks to the tapered walnut handle, orienting the grain in all three boards to run towards the curved end on the top side. Once the glue had dried, I hand-planed the surfaces rather than sand them. For kitchenware such as this, I find leaving a cut surface rather than a sanded one results in less raised grain to deal with after washing. I beveled the front edge with a spokeshave, again opting for a faceted profile rather than one sanded smooth. As I worked, I enjoyed the aroma from the wood and anticipated the aroma from the pizzas to come.