This article is from Issue 88 of Woodcraft Magazine.

Light to dark, it’s all good. Bocote varies a lot in color from yellow to orange with distinctive dark stripes. It tends to darken with time.

A study in contrast

Bocote (pronounced boh-KO-tay or boh-KO-tee) is one of the showier woods native to Central America. Its heartwood is a yellowish-orange with distinctive dark stripes. Over time, the lighter areas darken somewhat, losing their vibrant hues, but the sharp contrast remains. The sapwood is a grayish yellow and is clearly demarcated. If you happen to find a piece of quartersawn stock, you’ll see the flakes from the medullary rays really sparkle on the surface. Given that most of the US-bound bocote is on the small side—typically less than 8" wide and 7' long—you’d think it would come from smaller trees. This doesn’t seem to be the case. The trees reportedly are between 60' and 100' tall and 3-4' in diameter. The issue appears to be that bocote is tricky to dry, especially in larger dimensions.

Along with the contrasting stripes, bocote often features birdseye figure (above, right). Unlike birdseye maple, the eyes in bocote rarely cause trouble when machining. As with most species, highly figured pieces command a premium price. But even “average” bocote is spectacular. 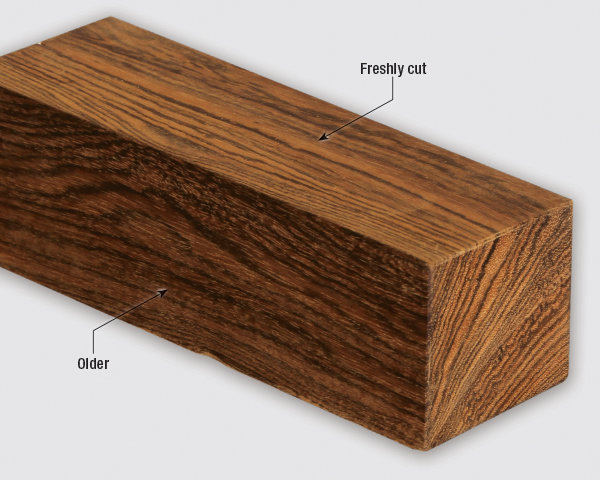 There are six related species of trees cut and sold as bocote (cordia spp.). Of those six, cordia elaeagnoides yields most of the lumber imported into the United States. It grows in the drier areas of southern Mexico and Central America. As of this writing, bocote is not on the IUCN (International Union for Conservation of Nature) Red List of Threatened Species or in the CITES (Convention on International Trade in Endangered Species) Appendices. Many of the specialty wood suppliers claim bocote is logged selectively (as opposed to clearcutting) and that the logs are dragged out by mule, eliminating much of the damage caused by trucks. But given the political unrest down south, coupled with the fact that much of the readily accessible forest has already been logged, bocote’s status and availability may soon change.

Being a “New World” lumber, bocote isn’t found in European or even classic American antiques (which mostly turned to Europe for inspiration). In its native region, bocote is used in building construction for everything from trim to flooring. (Carpenters must pre-drill this tough stuff for nails.) These days, a quick survey of on-line photos shows it mainly used for small decorative items such as boxes, pens, knife and razor handles, and even yo-yos. 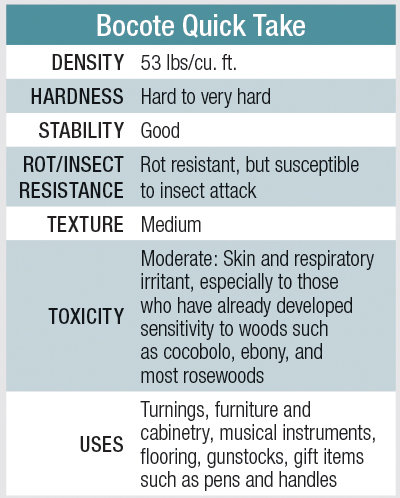 Bocote is available through many specialty wood dealers. Online retailers often post photographs of individual boards so you can see what you’re buying. Expect to pay $20 to $30/board foot for typical stock, but prices can vary widely.

For such a heavy wood, bocote works surprisingly well with both hand and power tools, although the embedded silica grit found in some boards can be hard on edge tools, including jointer and planer knives. Also, the “rowed” or interlocked grain on some boards may tear out no matter which way you work it. Here, scraping may produce better results than planing.

Despite imparting a waxy feel, bocote’s natural oils don’t seem to present a problem when gluing or finishing. However, the wood will quickly load up sandpaper. You’ll need to change abrasives more frequently than usual. Using stearated paper can help.

Bocote accepts both stains and finishes well. But staining rather defeats the purpose of using such a showy wood, so why bother? Instead, carefully color match your stock up front so a simple clear coat will suffice to enhance the wood’s natural beauty. 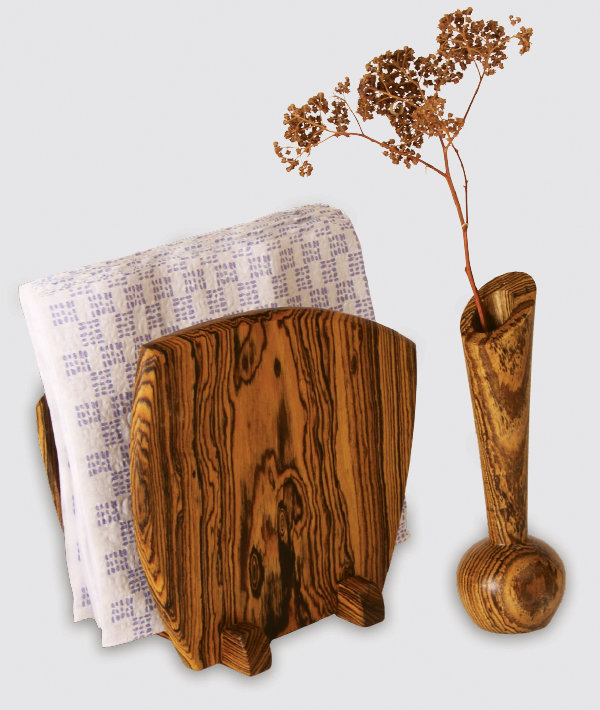 It had been a long time since I’d had occasion to use bocote, but as soon as I cut into it again, the memories came flooding back. Bocote has a very distinct smell. Some liken it to dill pickles, but I must be buying different pickles. To me, it just smells exotic, and very unique. If you’re used to working with domestic species, bocote boards will probably seem particularly heavy. But the wood’s density doesn’t really make it difficult to work.

I started my bocote investigation by turning a small vase. After marking the centers on the ends of the blank, I cut an “X” on one end to engage my lathe’s spur center. Then I tried to dimple the other end with an awl for the live center, but bocote’s density resisted. I drilled a small divot instead, and soon had the piece mounted. The turning blank was dark in color—a chocolate brown marbled with those distinct darker stripes. But as soon as I cut through that outer layer, the color changed markedly. Here was the famed yellow-and-black-striped stock I remembered.

Despite my troubles with the awl, my spindle gouge cut beautifully, leaving a smooth, burnished surface. Sanding went well, though the dust generated had kind of a greasy feel to it and stuck to everything. I found it didn’t pay to skip grits and the paper loaded up quickly. I stopped at 400 grit, satisfied with the polish.

The only real problem I had with bocote was drilling into the end grain to hollow the vase shown at right. In a case like this, I’ll usually start with a 1⁄4" bit, and work my way up to the finished hole size in several jumps. With the bocote piece, my 1⁄4" brad point started well enough but quickly drifted off center. The subsequent bits chattered so much that I eventually gave up drilling at the lathe and finished the hole on my drill press. I think the lesson here is not to be lulled into complacency by the ease at which bocote’s face grain cuts—it is a very dense wood that will remind you of the fact in unexpected ways.

The second piece that I made with the test boards was a napkin holder (above). I resawed the leaves and was pleased to see they stayed remarkably flat. I was apprehensive about this since most bocote is air-dried, and inconsistent seasoning can cause resawn pieces to cup. I used my block plane to remove the saw marks. Bocote planed like a much softer wood. Both resawn pieces tore a little along one edge, due to the rowed grain. The lap joints for the feet cut easily on the table saw and paring them to fit was no problem with a sharp chisel. The only trouble I had was seeing my layout lines on the contrasting grain. I added masking tape and drew on that instead. Over all, I am pleased with the end results and look forward to making more things with the rest of the sample boards.