This article is from Issue 104 of Woodcraft Magazine. 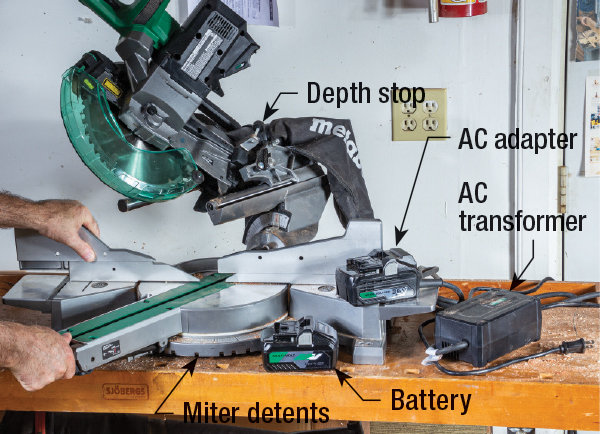 When Hitachi introduced the first sliding compound miter saw in 1988 it was a real game-changer, offering much more crosscut capacity than regular chopsaws. After rebranding as Metabo HPT (Hitachi Power Tools) in 2018, the company brought out a new line of Multivolt cordless tools including this new iteration of its venerable slider.

The tool is sold in kits with either a MultiVolt battery (4.0 Ah at 36 volts) and charger, an AC adapter, or as a “bare tool” with neither power source, for users who already have other Metabo batteries (see the Buyers Guide, p 62). I tested the saw with both power sources. The saw’s dual power options offer great flexibility for jobsite tasks such as installing trim or deck building. The battery charged quickly and powered several hours of consistent cutting. When crosscutting 3"-thick cherry, the battery actually provided more power than the adapter with its 20-foot cord.

I found that moderate lateral pressure on the switch handle deflected the motorhead, but only minimally affected cut accuracy. Pulling straight down and sliding straight back still resulted in straight, square cuts. Miter detents were easily located and spot-on. After mitering at all nine stops, the saw returned to zero degrees accurately.

Tilting the saw to cut bevels proved more complicated. The bevel scale pointer required minor adjustments to make the stops accurate. And beveling requires releasing an index pin located beneath the blade with one hand and holding the switch handle to set the bevel with the other, risking engaging the saw with one arm under the blade. Be sure to detach your power source when setting up bevel cuts. The saw tilts to 48 degrees on both sides, but due to motor placement, tilting more than 41 degrees to the right requires removing the right-hand sub-fence. 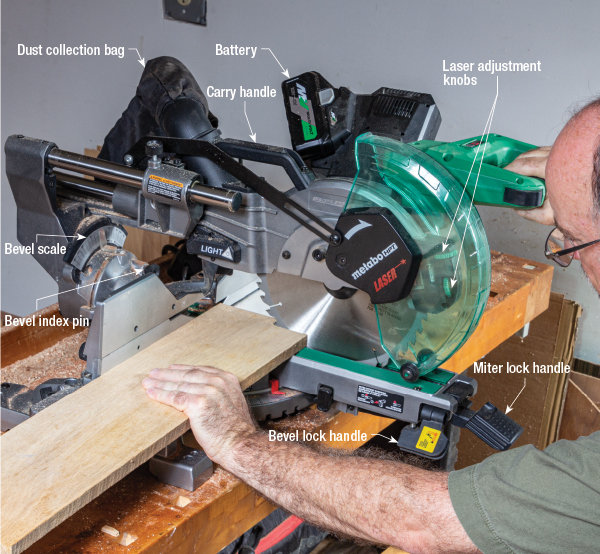 The brushless motor is quiet, and with its 15 amp rating, has plenty of power. The slide mechanism protrudes 13-1/2" behind the fence without sacrificing cut width. Spinning a 10-inch blade, the saw boasts an 11-1/2" maximum-width of cut on a 3-1/2"-thick board or 12-1/2 inches on pieces 2-1/2" thick or less—comparable to other saws in its price range.

The included 40-tooth blade cuts cleanly enough, but I swapped in a 60-tooth crosscut blade for further testing, resulting in cleaner cuts. I didn’t find the laser to be very helpful, but appreciated the built-in LED light, which helps with cut line visibility. The table proved flat and solid, and its long, stable extension wings provide good workpiece stability.

Ultimately, it’s accurate enough for cabinetry and furniture-making, but its portability and power options make it more suited as a jobsite saw, especially if you already own other Metabo MultiVolt tools.