This article is from Issue 101 of Woodcraft Magazine.

Knotty secretary. An on-and-off woodworker for fifty years, David picked up the hobby in college, where he built a bar in his basement and a base for a waterbed. He’s taken eight years to craft this drop-front secretary, choosing “cheap pine, knots and all,” he says, as a unique departure from the hardwoods typical of such a piece. In another variation from the Pennsylvania Secretary Desk on which his project is based, David left the upper portion open to display knickknacks. The bonnet top and serpentine drawers are all hand-cut, as are the secretary’s 200-plus dovetails. The finished piece takes pride of place in the Mitchell home, where even David’s wife appreciates his beautiful secretary. 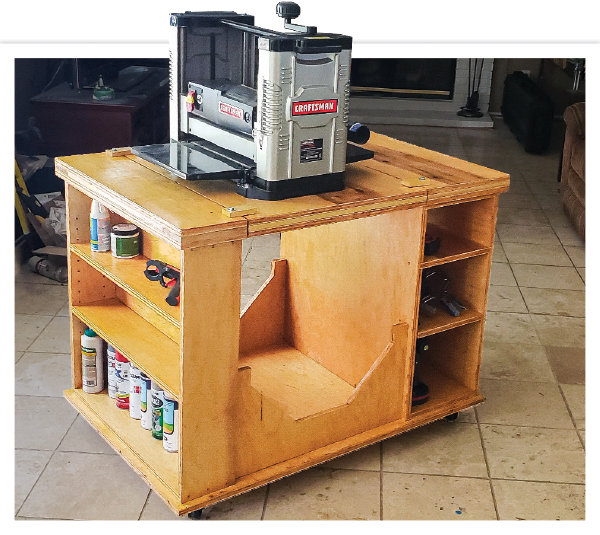 Flip your lid. With space at a premium in his small shop, Weishaar, a beginning woodworker, built this flip-top cart featured in the Oct/Nov 2011 issue. On one side, he mounted his planer, while the other side is currently unoccupied and serves as a work surface. Weishaar appreciates that the all-plywood cart is narrow enough to roll through a standard door when needed out of the way. He’s head over heels about his new space-saving work cart. 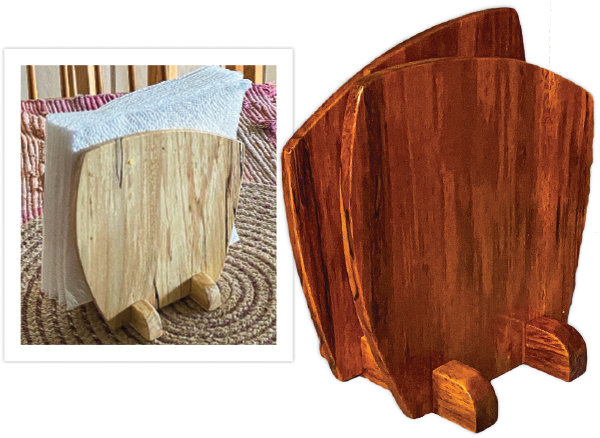 Wipe up your drool. When West Virginia woodworker Jon Peterson surprised his wife with a napkin-holder crafted of resawn spalted maple, she surprised him by asking for a few more to give as birthday gifts. Peterson’s second effort, in redheart, “provides a better contrast with the white napkins.” After resawing, the leaves were too thin to attach with dowels as in the original design (Aug/Sep 2020), so he cut a tight-fitting slot and secured them to the feet with glue before finishing the napkin holders with polyurethane. They’ll be gifts that are sure to clean up!