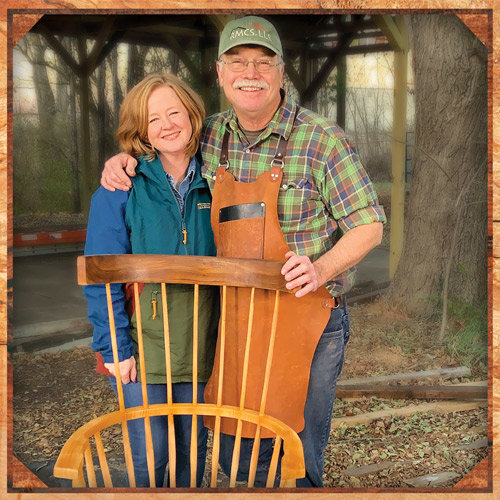 Co-hosts Scott and Suzy Phillips show off the Go-To Corner Chair that is featured in Episode 10 of “The American Woodshop.” (Photos courtesy of WBGU-PBS)

The American Woodshop Co-hosts Scott and Suzy Phillips began their 30th season with PBS on Monday, January 9, with the first of 13 new episodes based on the theme, “The Best Of!”  Check local PBS TV stations for airtimes or watch on Create® TV, YouTube PBS TV, or 24/7 at wbgu.org/americanwoodshop.

“Woodcraft congratulates Scott and Suzy Phillips as they begin the 30th season of The American Workshop, a popular how-to series that offers valuable woodworking instruction and inspiration to viewers of 363+ PBS channels and online 24/7,” President and CEO Jack Bigger said.

A veteran woodworker who started woodworking in his father’s shop in 1966, Scott has learned the truth of this statement, which he shares frequently: “Make it your own with your own hands. Nothing can be more satisfying.”

Scott and Suzy hope that viewers will discover the same satisfaction in the projects and techniques they have selected for Season 30. 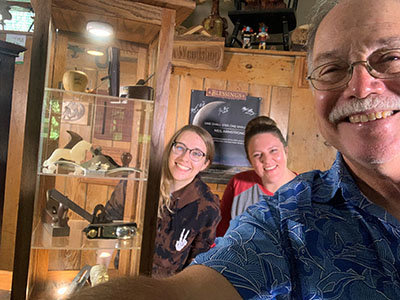 The first 2023 episode features a Vintage 4 Glass Candy Cabinet like ones popular in the 1930s and often found at a corner store. The four-sided glass and red oak display case is easy to build with simple tools, according to Scott. Blended Danish oil creates an old-world look, while tapered red oak plugs add the perfect finishing touch.

Other Season 30 Projects, in the order they will air, include:

•Live Edge Windsor Inspired Bench – Insider tips on creating live edge benches helps to make home crafting easy. Natural edges with curves and bark can be challenging to mill. Track saws are explained and demonstrated as the perfect addition to the home woodshop. 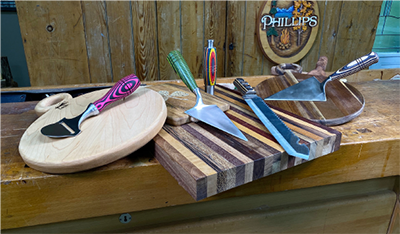 •Woodcraft Magazine Tool Organizer – Designed as a freestanding red oak tool tower, it can easily be used in kitchens of any size as a utensils and baking keep. Steel casters add a mid-century modern look. Originally designed by the Woodcraft Magazine staff. Router cut half-blind dovetails are milled with the perfect jig. 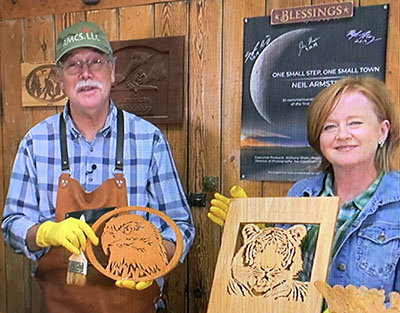 Suzy shows her reverse image tiger and Scott his eagle, both done on the scroll saw.

•Scroll Saw Art and Sign Making – This type of cutting is remarkable. The delicate blades cut the hardest of wood (hard maple) with ease. Suzy demonstrates the techniques that she uses for the best results. She scrolls a reverse image tiger, and Scott uses the same technique to complete an eagle. Routed lettering featured.

•Art Glass Display Cabinet – Making something new from something old – a vintage piece of art glass is combined with a custom-made 35mm hinged hard maple cabinet. This Arts and Crafts style is the perfect accent piece in any room. Internal lighting makes this colorful work come to life. 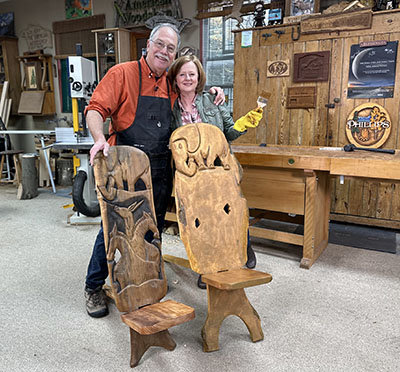 •Carved Garden Chairs – Playfully carved animal accents make these keyed chairs sure to be conversation pieces, as well as welcome seating. The name reflects the design in which the seat and single back leg are one piece and fit into the chair’s back like a key.

Chairs are deceptively comfortable and invite the viewer to have a seat! Created with a bandsaw, jigsaw, cordless drill and carving chisels. 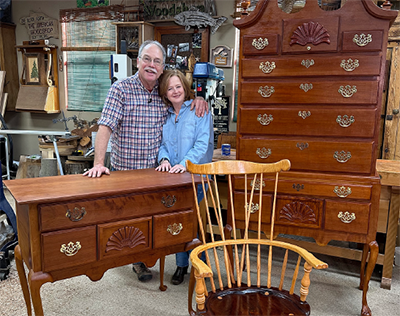 Scott and Susie are surrounded by period furniture pieces and the Go-To Windsor Chair that is Suzy's favorite of the season.

•Chippendale Highboy Carvings and Turnings – This period furniture design is inspired by Thomas Chippendale of the 1700s. Elegance in American black cherry. The scallop shell carvings are iconic and uniquely American. The final turnings just lift the eyes to the broken arch pediment.

•Finishing for the Ages/Queen Anne Low Boy Finishing Techniques – This show is completely dedicated to demystifying the finishing process. This episode shows the steps needed to finish with style and ease.

•The Go-To Windsor Corner Chair – The chair is the most used daytime furniture in every home. This unconventional corner chair is the perfect way to make sitting in the corner fun. It is made of a bent lamination armrest supported by turned red oak spindles with a plank seat.

For more information about The American Woodshop, visit https://wbgutv.org/americanwoodshop