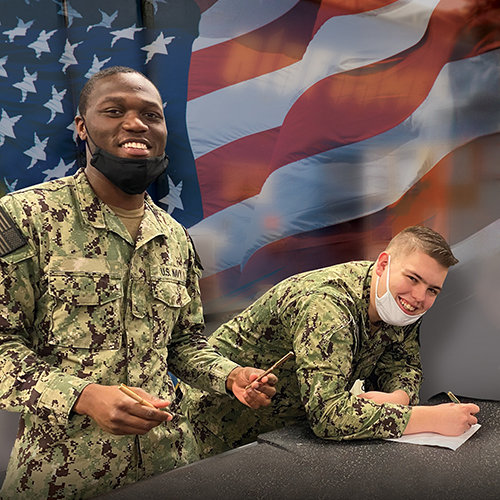 Members of the US Navy Fleet Readiness Center, Mid-Atlantic - Division 500 were stationed at Naval Air Station Oceana, Virginia Beach, Virginia, when they received these pens from Woodcraft this year.

Send a message of love and support to an active duty member of the military or one who is recovering from injuries – turn a unique wood pen during Woodcraft’s 19th annual Turn for Troops Turn-a-Thon event on Nov. 5 and 6. Contact your local Woodcraft store for details.

“Woodcraft depends on volunteers to provide the pens that make this program for military personnel possible,” President and CEO Jack Bigger said. “They have been very loyal over the years, so we anticipate another successful event.”

To participate in the Turn-a-Thon, contact the Woodcraft store nearest you for more details. If you have never turned a pen but would like to participate in the turn-a-thon, check with your local Woodcraft store about whether first-time pen turning instructions will be provided the day of the turn-a-thon. You can also check out two Woodworking Adventures blogs that include instructions for how to turn pens: Pen Turning 101 and A Great Start for Basic Pen Turning.

If you do not live near a local Woodcraft store, your local store is not participating, or you do not feel comfortable attending an in-store turn-a-thon, contact Lori Harper at Woodcraft corporate headquarters – 304-865-4107 or lori_harper@woodcraft.com. She will provide information and instructions for sending finished pens to the corporate office. 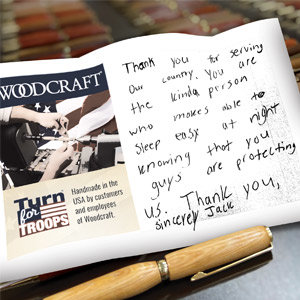 Pen makers are encouraged to include notes with their pens. In addition to thanking the military man or woman for their service, notes sometimes include the type of wood used to turn the pen and contact information for the maker.

The Woodcraft store in Seattle, Washington, shared some notes written by student volunteers, like the one shown here that says: “Thank you for serving our country. You are the kinda person who makes (us) able to sleep easy at night knowing that you guys are protecting us. Thank you.”

Another young turner wrote: “Thank you for serving our country, and as a token of my appreciation to you I made a pen. In my family, I have many veterans and people who are still in the military, so I understand how hard you have worked, and how much time you spend to keep America a Safe Place.”

In return for the pens, some recipients send thank-you notes, which explain why Woodcraft continued to sponsor this event in the midst of COVID and beyond.

“I don't normally ask for anything, but would I be able to get one of these pens? I am a disabled veteran with almost 8 years active service in the Army. I deployed twice and was injured during my first deployment when a bomb hit my truck. I have had a hard time with depression, and I think having something physical and knowing someone cared enough to make it for people like me may help some.”

A Lt. Col., USAF, with the 52nd Civil Engineer Squadron stationed in Germany wrote on behalf of his squadron praising the unique qualities of the pens his group received. “Everywhere I go I see people using them. Thank you for taking the time to make this happen. It really helped boost our team’s morale.”

A retired Army vet who works security at a hospital asked for some pens to give out to veterans when he sees them. He later wrote to Woodcraft to report that over four months he had given pens to vets from the Army, Navy, Air Force, Coast Guard, and National Guard, some who had served in Korea, Vietnam and Iraq/Afghanistan, and all who were happy with the unexpected gift.