The Woodcraft Veterans Day Turn for TROOPS Turn-a-thon has produced results that none of us would have expected, with an amazing 10,519 pens being turned and shipped to the Middle East. What an outstanding response! We increased from 6,003 last year which is over a 75% jump!

Most of them shipped out on November 21, and the remainder followed up on November 27. There have already been at least two stores contacted by email or cell phone from soldiers saying “thank you” so we know they arrived at their destination.

The top quantity honors go to Nashville who had 1,689 to contribute to the TROOPS. This was not an accident, but the result of hard work and determination. Back in April when the Congress was squabbling about troop funding, David took the matter to heart and began visiting clubs and making arrangements. Aaron also visited woodworking clubs and gave demonstrations on turning pens. There was a committed customer who turned over 500 pens himself in memory of a local serviceman who had made the ultimate sacrifice and to honor another that had returned with life-changing injuries. You can read his story below. 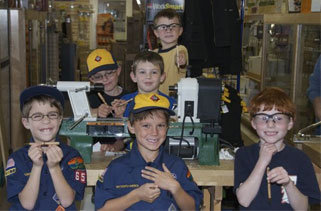 Working with kids in this way has a double benefit of sorts. First of all, we are getting the pens made for the Troops in harm’s way which was the reason for this program. Secondly, he was making an investment in the future lives of the kids who were involved. They will long remember the opportunity that Eric gave them.

Boise, Idaho was our third location to exceed the 1,000 mark with a contribution of 1,032. When Monte was asked what their secret was, he said “We asked. Sorry for the short response, but it was as simple as that. We asked and people said, ok”.

Because there were stores breaking the thousand mark, it does not lessen the impact of the normal turn-a-thons. Every single one of the pens and notes represents an opportunity to show compassion and kindness to a soldier who is far away from home at Christmas, staring death in the face every day for the sake of righteousness and freedom. This year, when we sit down to open gifts from under bright and glittering trees, let’s take a minute before starting and say a prayer for the guys on the other side of the world – there for us.

We had some of the very creative and well-represented packaging this year. Here are some of the outstanding packages made:

Berea Hardwoods contributed 1,000 kits and 9,519 were supplied by Woodcraft! We just want to thank each and every participant in this year’s Turn for TROOPS campaign. God Bless America!