This article is from Issue 105 of Woodcraft Magazine. 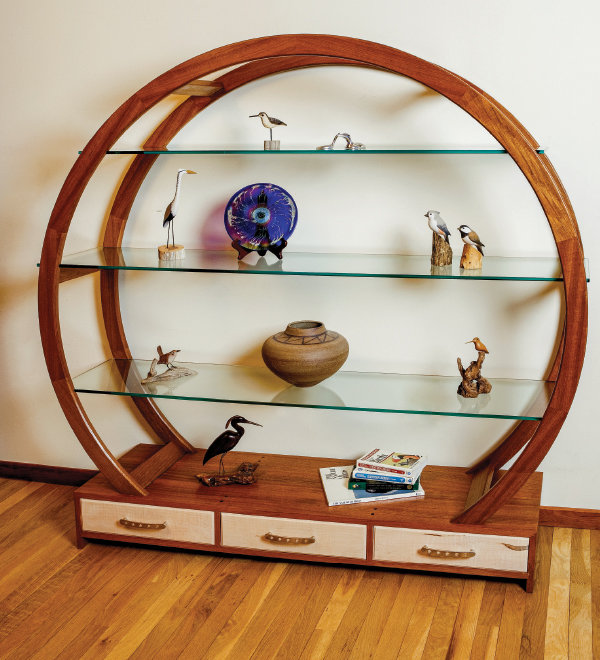 Beauty and brawn. In addition to its good looks, jatoba is stiff, strong, and durable, making it a good choice for projects that push what wood can do structurally.

Is it pronounced “Ja”toba as in John, or “Ha”toba as in Havana? It’s hard to get a definitive answer, though you’ll find advocates on both sides of the issue. The wood was dubbed Brazilian cherry because it sort of resembles the deep red stain many cabinetmakers use to finish their “cherry” products. This isn’t to say that the wood isn’t beautiful. It runs from a rich orangish-brown to russet. It darkens with age and finishes to a deep reddish-brown, with occasional golden highlights. In addition to its good looks, the wood is quite hard, dense, stiff, and naturally resistant to rot and insect damage. This makes it a good choice for projects where strength and durability are important.

Jatoba (Hymenaea courbaril) grows from southern Mexico through South America and the Caribbean. Most of the wood imported into the U.S. comes from Brazil. The trees are plentiful and can reach 125' with 6' diameter trunks. The first branches are often 50' or more up, providing straight, clear lumber. Jatoba is not listed on the CITES or IUCN Red List and is considered a species of least concern.

Jatoba was first imported into the U.S. about 30 years ago. Its dark good looks initially made it popular with furniture makers. Then came the building boom of the 1990s when flooring manufacturers flocked to this new exotic. Finding the name jatoba a nonstarter, they rechristened it Brazilian cherry, and sales took off. The exotic flooring became nearly as ubiquitous as red oak in many areas. The subsequent economic crash and changing tastes have seen the wood’s popularity decline, at least as a flooring choice, and with that, its availability.

Jatoba is imported as solid lumber, veneer, and plywood. In solid stock, 4/4 to 12/4 thicknesses are available in addition to turning blanks. Pricing is in the $9-12 per board foot range, with thicker and wider pieces selling at a premium. Because of its hardness and density, drying is difficult. Be sure to carefully inspect your stock, looking particularly for end checks which can hide in the dark grain. Also, allow plenty of time for the wood to acclimate to your shop before milling. Like other hard, dense species, jatoba takes its toll on cutting tools, quickly blunting sharp edges and chipping and burning with all but freshly sharp saw blades and machine knives. Compounding these troubles is jatoba’s interlocked grain, making hand planing difficult, if not impossible, due to extreme tearout. Scraping and sanding surfaces are usually the way to go. While the wood isn’t known for its toxicity, some cases of skin irritation have been reported.
Jatoba has a reputation for being tough to glue and finish due to its oily resins, so test your stock before committing to a glue-up or finish. A quick wipe with acetone before applying glue can help parts bond. And a thin coat of shellac under your preferred topcoat helps finish adhesion. The wood holds fasteners well, but driving them can be challenging. Predrill for both nails and screws, then lubricate them with wax before installing. Finally, while the wood is quite stiff, it does respond well to steam bending should your project require a curve. 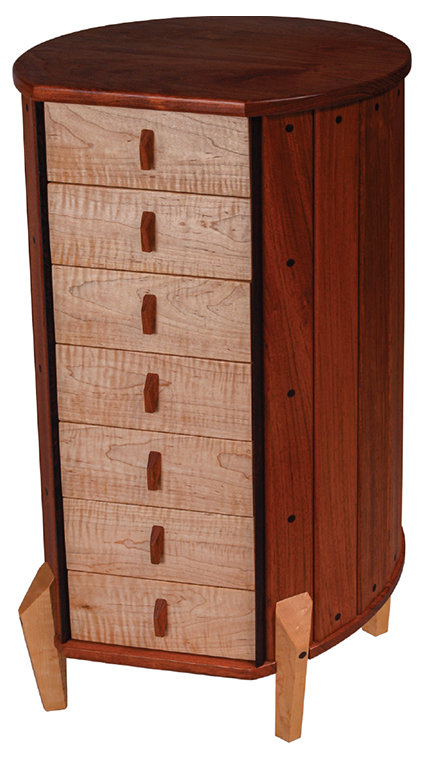 Going in circles. The case for this small chest of drawers is made from a series of jatoba slats splined together.

A study in contrast

When I set out to make this cylindrical chest of drawers, I knew I wanted to use a white, black, and red color pallet. For white, I chose curly maple on the drawer fronts and feet. The trim and hole plugs are wenge for the black. The red, you can probably guess, is jatoba. I chose this for its rich red-brown color and muted grain lines, not wanting the figure to compete with the form of the piece and wanting something a little more exotic than cherry or walnut. Working with this hard, dense import posed certain challenges. To ensure the staves stayed straight, I milled them oversize and allowed them to sit for a couple weeks before sawing them to their final dimensions. After experiencing significant tearout when planing some of the pieces, I opted to cut them to thickness on the table saw instead. Then I went with a sharp card scraper to remove the saw marks rather than risk more tearout from a hand plane. The wood scrapes beautifully and sands to a polished luster. I did not have any trouble finishing the piece with a wiping varnish, but in retrospect, I think I should have taken the warning about glue more seriously—the edge joint in the top has started to open up a little at one end.