This article is from Issue 103 of Woodcraft Magazine.

Varied coloring. Don’t let the light color of hickory’s sapwood (left) fool you; it’s every bit as tough as the darker heartwood. “Calico” boards (center) with a mix of sapwood and heartwood are commonly available, especially as flooring. Spalted hickory (right) is rarer but quite spectacular if you can find it. 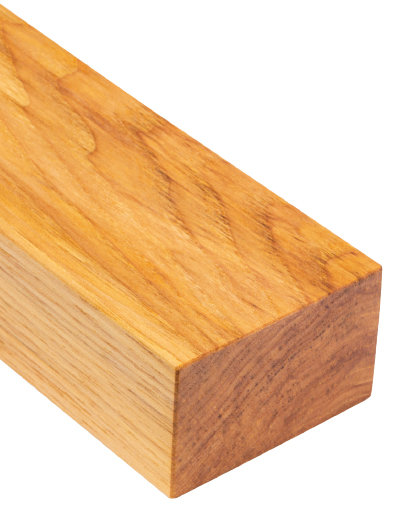 Strong and straight. Hickory’s heartwood is typically a bronze-ish medium brown with straight grain. What the wood lacks in pizzazz, it more than makes up for in strength.

As tough as they come

As Presidential nicknames go, they don’t get much better than that of Andrew Jackson. He was dubbed “Old Hickory” after exhibiting his toughness during the War of 1812. And tough is an apt word to describe hickory. Its combination of hardness, stiffness, shock resistance, and density make it the toughest of the commonly available North American hardwoods. While not as showy as some of the other more prized hardwoods, hickory is not without its aesthetic merits. The creamy yellow sapwood is reminiscent of birch and pine, but a lot more hardwearing. And the tawny brown heartwood compares with cherry before it ages. A lot of hickory flooring comes through with “calico” boards displaying a combination of sapwood and heartwood that adds a bit of down-home charm.

A handful of species from the hickory and pecan family (genus Carya) are sold generically as hickory. True hickories such as shagbark are slightly stronger than those from the pecan side of the family, though the pecan-hickory species are more stable. But, as the species tend to be lumped together, the differences are moot. Essentially, if you’re after maximum strength, check the end grain for boards with wide growth rings. In hickory, faster growth makes for stronger wood. Hickory (and pecan) trees grow abundantly throughout eastern North America and are not listed on the CITES or IUCN Red List.

For centuries, woodworkers have utilized hickory’s inherent strength for bows, wheel spokes, drumsticks, paddles, and handles for tools such as hammers, shovels, axes, and picks. In the world of sports, hickory makes great lacrosse stick handles, baseball bats, skis, and golf club shafts. And if you’re old enough, you may remember the sting of a hickory switch from your school days. Early aircraft were constructed with canvas stretched over hickory frames. And the bark from certain species was harvested for chair seats and basket weaving. Outside of woodworking, hickory makes for excellent firewood due to its high BTU yeild. It also adds flavor to barbeque and smoked meats. More recently, it has become popular for flooring and cabinetry.

Hickory is sold as solid lumber, veneer, and plywood. In solid stock, 4/4 to 8/4 thicknesses are readily available, though boards tend to be narrower (4-12") and shorter (12' and under) than other common species such as poplar and red oak. Pricing is in the $3-5 per board foot range. While solid hickory can be worked with both machine and hand tools, you’ll get a taste of how tough it is from the beginning. It tends to tear and burn with all but the sharpest of machine knives and saw blades and quickly blunts honed edges. Don’t let this discourage you. Working hard, dense woods such as this with well-sharpened tools can be a delight. The endgrain pares without tearing, while scraping and sanding the face grain quickly yields shimmering surfaces. Hickory glues well, holds nails and screws tenaciously (be sure to predrill), and stains and finishes to a nice sheen. It has excellent bending properties, whether steamed or laminated. Its one major limitation is that it doesn’t hold up well outdoors. 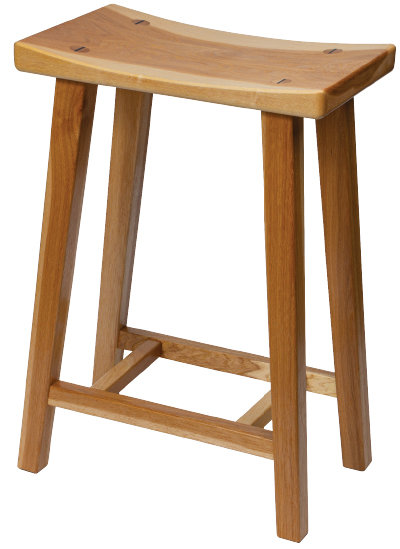 Robust construction for a hardy stool. Wedged through-tenons in the seat, mortise-and-tenon joinery for the stretchers, and trapezoidal geometry combine for a solid place to sit.

In my experience, counter-height stools and bar stools take a beating. Not only do they see heavy use, but they are frequently sat and stood upon in ways they weren’t necessarily designed to accommodate. In designing the piece shown here, I wanted to develop a stool that could stand up to all sorts of abuse—one worthy of being called darn tough. And what better wood to choose than hickory? If some part of this stool fails, it won’t be because of wood choice.

Building this piece revealed hickory’s challenges. The 1" Forstner bit I used for the seat joints needed sharpening after drilling only two holes. Paring the shoulders at the tops of the legs required a particularly sharp chisel, but the end grain sliced cleanly. And smoothing out the seat scoop with a spokeshave after bandsawing took far more time than anticipated, though the wood did cut without tearing. When I make more of these, I’ll design a router jig to facilitate this.

In all, I’m pleased with the result from both a functional and aesthetic standpoint. The stool is rock-solid, substantial, and stable, with hickory’s coloration lending it an air of rustic sophistication.