Home Articles Woodsense: From Peru to You

Woodsense: From Peru to You

This article is from Issue 25 of Woodcraft Magazine.

You’ll find these five lesser-known species from Peru’s rainforest real knockouts for your woodworking projects, and as you’ll discover, your fun using them will be guilt-free!

Sure, there’s still a calamity called rainforest destruction. It’s happening throughout the Amazon region of South America and elsewhere in the tropics. However, commercial logging takes responsibility for only a part of it. For the rest, slash-and-burn agricultural practices, mining, and road building catch the blame. The large-scale logging that does continue seeks trees long valued in the world timber trade—imbuya, mahogany, pernambuco, rosewood, snakewood, and a host of others. Just getting to them cuts a wide swath, let alone bringing them out. As a consequence, many unwanted trees go to waste.

Thankfully, there’s a competing philosophy regarding harvesting trees that’s far less destructive, more economical, and more profitable to the locals. It’s called selective harvest and it focuses on lesser-known species such as the five Peruvian hardwoods presented here. (See the sidebar on the facing page to find out how it works.) 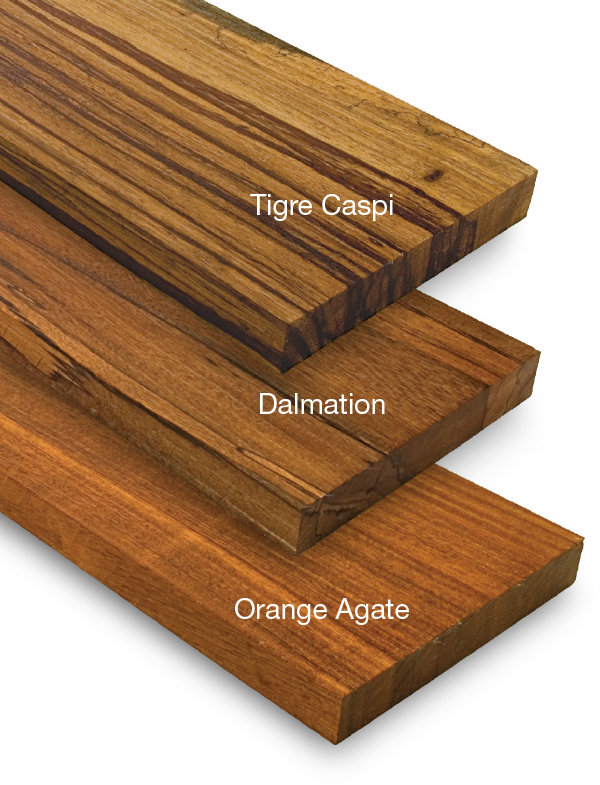 “Lesser-known species” doesn’t go far enough in titling our five featured woods. It should be “unknown species.” After all, only one of them has a bona fide Latin species name—limoncillo, a Rheedia according to the U.S. Forest Service’s list of tropical timbers of the world.

Why is that? According to forest experts in Peru, there’s simply just a lot of confusion at this time. First of all, the Amazon rainforest contains perhaps hundreds of thousands (or more) of tree species, but only a small percentage have been scientifically identified and classified. Therefore, most rainforest woods have been given common names rather than a Latin genus. However, even common names can vary from village to village and river valley to river valley. Making it even more confusing, some Amazon woods were named and classified years ago only to unknowingly be renamed and classified as a new species at a later date!

Meanwhile, Peru and other South American countries (as well as wood suppliers) are working diligently to upgrade the identification and classification system. But regardless of their lack of scientific names, woods like dalmation, huayruro, limoncillo, orange agate, and tigre caspi have a history of use by the Amazon basin’s indigenous people. With primitive tools, the villagers have hewed them into huts and homes, fences, boats, furniture, and about everything that can be made of wood.

In today’s relatively small scale forest products industry that’s based on selective harvest, Amazonian hardwoods that were once considered waste wood are fashioned into decking, flooring, gunstocks, knife and turning blanks, finished woodturnings; and, of course, kiln-dried lumber for export. 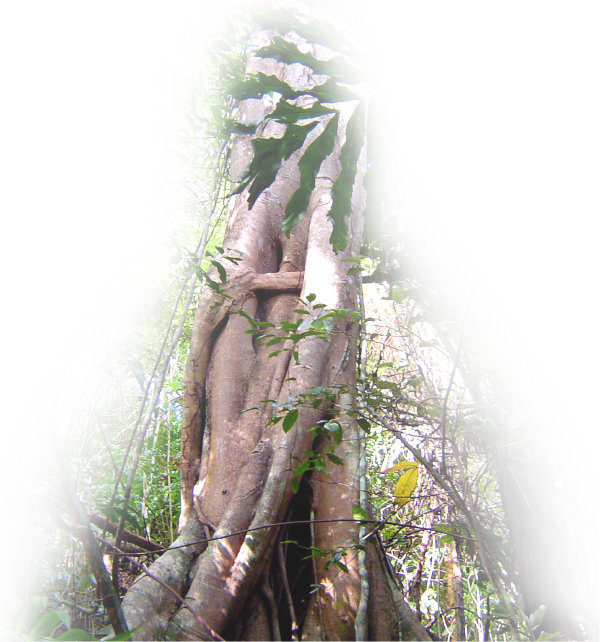 The rainforest of eastern Peru consists of 156 million acres (third largest in the world) with large areas still intact. Drained by the Marano and Ucayali rivers, which form the headwaters of the mighty Amazon, the area is rich in natural resources besides timber, such as oil, gas, and minerals (especially gold).

(Note: Forested land receiving more than 78" of annual rain qualifies as a rainforest.)

Available in the United States only at Woodcraft stores, the Woodcraft catalog, and online, the Peruvian hardwood sizes and prices reflect their low-impact, lower volume harvest and their uniqueness in the woodworking marketplace. Dalmation, orange agate, tigre caspi, huayruro, and limoncillo come in 4" and 6" widths, thicknesses from 1/4" to 2", and lengths from 24" to 48". The price of a 1×6×48" board ranges from $38.99 to $45.99. All boards would grade FAS or better by U.S. hardwood standards, and they’re surfaced four sides (S4S).

How to select the best stock

First of all, look for boards of even color (sapwood is little problem). Huayruro and orange agate are of fairly uniform color, so no trouble there. Dalmation, limoncillo, and tigre caspi, though, have pronounced figure and varying grain patterns, so plan your project joinery (as with a jewelry-box project) so that the wood grain has an eye-appealing flow. There’s also the possibility of combining the figure of one of the latter woods with the even grain of one of the former for a dramatic accent. If you have a project plan, bring a copy of the cutting diagram, cut list, any exploded view with you when you buy for the best end result. To find out how these woods perform in the shop see the Performance Profiles on page 72.

FROM THE RAINFOREST TO THE SAWMILL

However, selective harvest, a better method that ensures the rainforest’s sustainability as a resource, is responsible for delivering the handsome hardwoods shown here.

A worker halves a log so it can be reduced to smaller sections.

Here a worker chainsaws a log into more manageable pieces or cants. 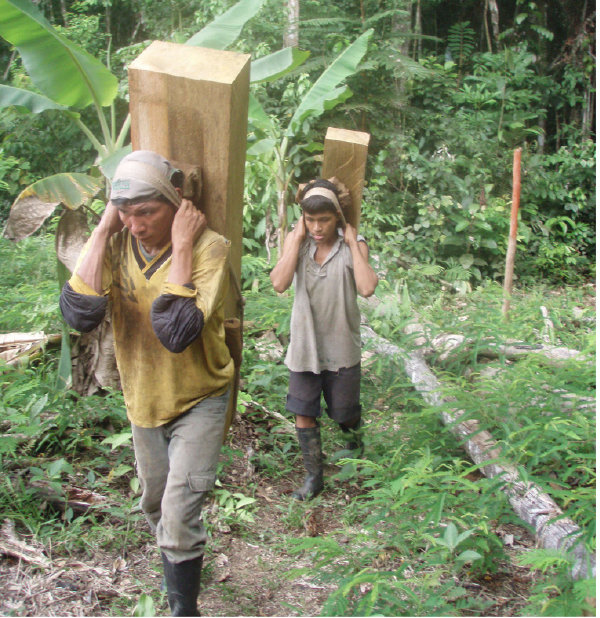 On a foot trail, workers carry cants to a truck loading site.

Walk in and carry out

Under the guidance of Donald Harby, a consultant and forestry professor at the University of Central Missouri, logging crews out of Iquitos, Peru, began implementing this method in 2007. Here’s how it works.

First, desirable trees are identified, and simple foot trails to them are hacked out of the rainforest. Next come the harvest crews, equipped only with chainsaws and the necessary hand tools. The selected trees are felled, cut into cants 49" long (a size easily carried on a man’s shoulders), squared off, and walked to the loading site. Then, the cants are trucked to a basic, no-frills sawmill for resawing into boards prior to seasoning and kiln-drying.

As primitive as the method seems, it has multiple benefits over conventional harvesting: It puts more native people to work. The yield is higher because a chainsaw operator can harvest much more of a tree than mechanized equipment can. Fuel consumption is low. Sawdust residue adds to the fragile soil. Finally, there’s less disruption to the rainforest since only specific trees are taken, and large roads are unnecessary. 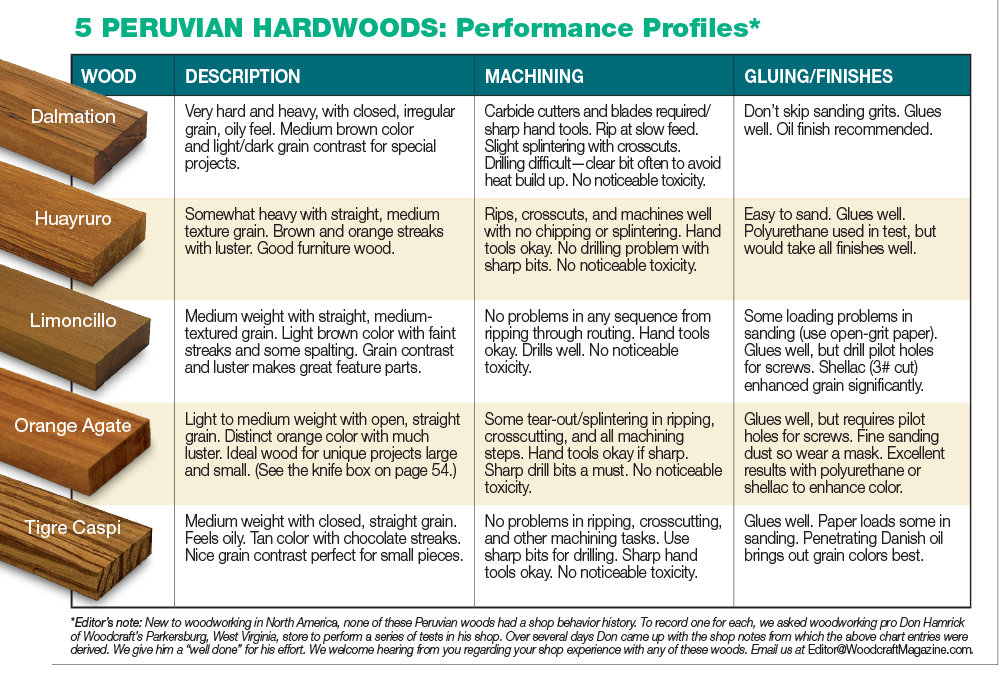