Woodcraft Funds Scholarships for Three Students at The Krenov School 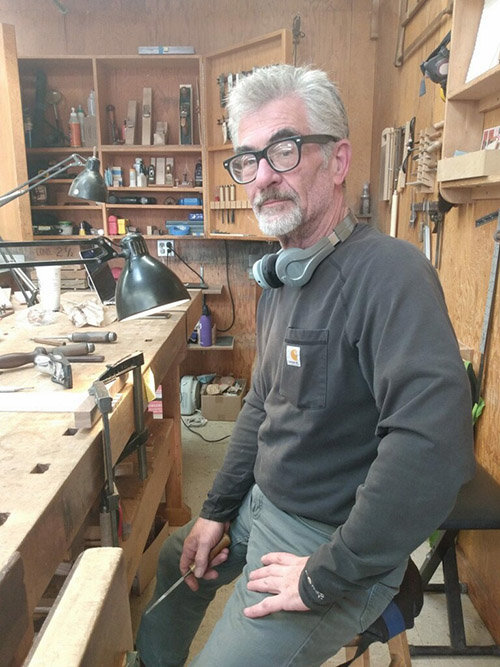 Chris Secrest takes a break during his woodworking instruction at The Krenov School.

Three students at The Krenov School in Fort Bragg, California, are recipients of scholarships awarded by The Krenov Foundation and funded by Woodcraft Supply.

Chris Secrest of La Crescenta, California, was presented his scholarship this semester. Hayden Castagno of Rexburg, Idaho, and Miles Gracey of Los Angeles, California, received scholarships in the fall of 2021 for the first semester.

The Krenov Foundation, established in 2014, awards several substantial scholarships each year to students attending The Krenov School, which was founded in 1981 by the late James Krenov, a highly acclaimed cabinetmaker, author and teacher.

“Woodcraft is proud to support this scholarship program that encourages participation and excellence in fine woodworking,” President and CEO Jack Bigger said. “The Krenov School and Foundation play an important role in preserving this centuries-old craft.”

The Krenov School. A part of Mendocino College, The Krenov School offers an intense fine woodworking and cabinetmaking program. Prior to COVID, the program was nine months, six days a week, eight hours a day over two semesters. To accommodate COVID protocols, the program has operated on a shorter timeframe with fewer students to allow safe distancing. In February, the school announced on its Facebook page that it would again be accepting applications for the nine-month program, starting in August 2022.

Although machinery is used at the school, the focus is on teaching students to use hand tools and learn to design and execute a project on their own. Some students opt to go a second year for more advanced instruction. Short workshops are also offered in the summer.

Pursuing Wood in a Creative Relationship

Chris Secrest, First-Year Student. Chris credits his grandfather for introducing him to woodworking and carpentry as a kid growing up in San Antonio. Woodworking remained a part of his life into adulthood, but he pursued screenwriting and for many years made a living designing and creating motion graphics. A 2018 summer workshop at The Krenov School so inspired him that he switched to woodworking and related fields full-time, eventually focusing on commission work that led him back to The Krenov School.

Regarding his current studies at The Krenov School, Chris said: “The emphasis here at The Krenov School is on deliberate, studied progress towards completion of one’s project. The luxury of time and attention to detail isn’t often the case out in the real woodworking world, so the techniques and processes learned here at Krenov will hopefully serve to ground and inform my future work, keeping one foot in these time-honored traditions while striving for competitiveness in a larger mass market of craftspersons.”

“Going forward,” Chris observed, “the techniques and practices I’ve learned at Krenov will certainly elevate my working style as well as my end product, helping to differentiate my work from examples of turn-the-crank products. I already have several commissions waiting in the wings for me when my instruction here is complete, and I’m looking forward to applying what I’m learning now to those upcoming projects.”

During his first year at The Krenov School, Chris built this keepsake box for his son, Emerson, as a Christmas gift in 2021.

Construction Details: The carcass, drawer front, lid and lift-out divided tray come from a gorgeous piece of Honduran Mahogany. The top was coopered using a hand-made coopering plane Chris built for an earlier coopering exercise, and he enjoyed it so much he integrated a coopered element into this project. The drawer has Maple sides and, for its pleasant aroma, Chris chose Port Orford Cedar for the drawer bottom. The carcass bottom is Mahogany frame and panel construction, and the partition between the drawer pocket and the tray compartment above is a jointed Tanoak panel. Chris used Bamboo nails to fasten the tray dividers to the tray sides for strength and contrast. Finally, his two pulls are hand-shaped Rosewood, which he also used for the box feet. 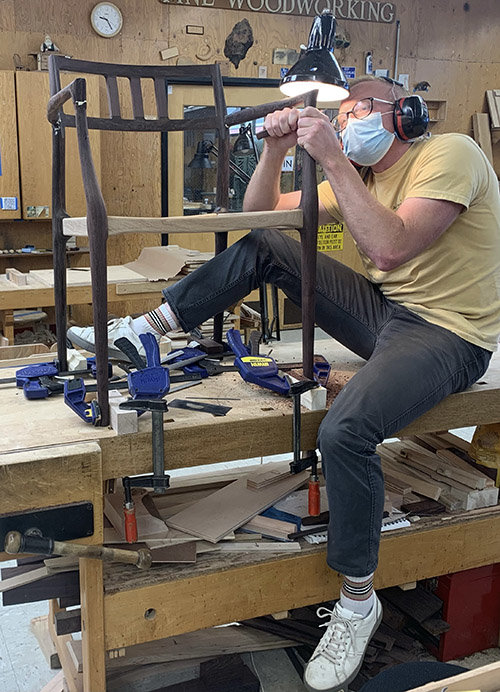 Hayden Castagno, Second-Year Student. Hayden grew up spending time in his father’s metal fabrication shop and went on to make a living working with metals. He learned the detail-oriented aspects of woodworking as teen, using inlay work to make skateboards. In his marquetry research, he saw The Krenov School mentioned, and in 2019 he applied.

“As a first-year student at The Krenov School, Hayden said, “I experienced a complete transformation as a craftsperson, which can be attributed to the environment: 48 hours a week surrounded by supportive instructors, inspiring alumni, and a tried and true curriculum.”

Hayden said he began combining his metalworking background with woodworking by making tools, starting with miniature brass spokeshaves. “I have since built on that and started a business under my own name, making a range of tools that became useful in the school. I have plans to make functional furniture and continue on the toolmaking path.”

First Project: Red Gum Wall-Hanging Cabinet, Red Gum Eucalyptus, Holly, and Spalted Alder with marquetry and 28 dovetailed corners.
Fourth Project: Hayden had no dimensions or prints of the original Niels Moller Model 64 Chair, so he said: “I worked off images and sketched out full-size drawings by hand. It was the perfect project to combine everything I had learned into a complex, ergonomic, functional piece of furniture.” Materials are Rosewood, White Oak, and Danish Paper Cord.
Third Project: Unrequited, display cabinet made of Pau Ferro and Pear wood. Box has a drawer with a silver pull and a glass top. Opened drawer shows mirror underneath that reflects hints of the marquetry design underneath the curved top.
Second Project: Display Cabinet on a Stand is made with American Sycamore, Imbuya and Ebony, with brass accents and glass doors.

Marquetry under curved top of Unrequited.

#2: Display Cabinet on a Stand 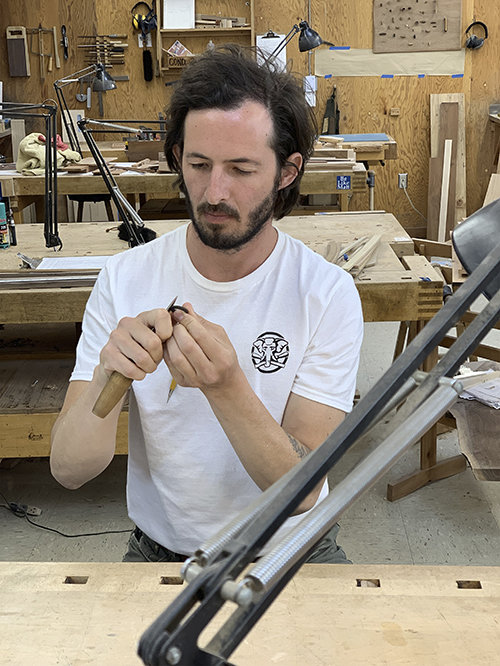 Trained as a cabinetmaker, he found his way to The Krenov School where he challenged himself to make objects with the precision and techniques only possible at a school like The Krenov.

“The Krenov School offered a safe and supportive space to test the limits of my skills and experiment with new techniques,” Miles said. “The time offered by the school allowed me to slow down and listen to the materials, and the class itself provided constant encouragement and cross-pollination of ideas.”

Miles said he will take the skills he learned at The Krenov School to several artist residencies where he will further refine and expand his body of work.

Cabinet in D Minor: Made of Port Orford Cedar, Ebony and Brass in 2020. It features spring-loaded, push-button drawers with Ebony bottoms. Drawers are tuned to a D minor cord. The cabinet offers a sweet Cedar aroma.

Ends Meet: Made of Gaboon Ebony, Macassar Ebony, Pear and Brass in 2022. It has six shaped Ebony legs, two Ebony carved screens, two chambers that are hinged and can be configured at different angles, compound curved tops and carved pulls.

Hats Off To Krenov Talent

Congratulations and best wishes for a successful future to these three dedicated woodworkers, and to all the Krenov students who share their passion for building with wood in the James Krenov tradition.