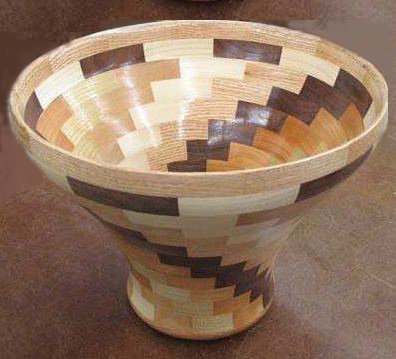 Segmented bowl turnings are Ron Thompson’s favorite choice of woodworking these days. A woodworker for 35 years now, Ron began with mostly flat work including shelves and end grain cutting boards. This one below is made from Exotic Brazilian Cherry and Domestic Cherry Wood.

(Bowl creation #41, “The Tornado” is made from walnut, maple, cherry, beech, sycamore and sassafras, pictured) 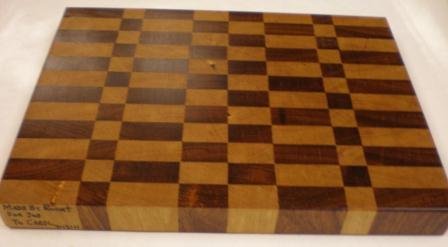 Not the Jim Morrison, legendary singer/song writer and once leader of The Doors band, but the just as talented at woodworking (and living legend!) leader and teacher of some of the finest woodworking that sings it’s own tunes from the results seen by many of the turners in this area. Jim shares his patience and years of experience with everyone.

Segmented bowls are made of individual glued and pressed pieces of wood into a ring shape, stacked for layers on to one another and then turned for some truly beautiful works of art. (See one of our previous blogs on making a segmented press.) 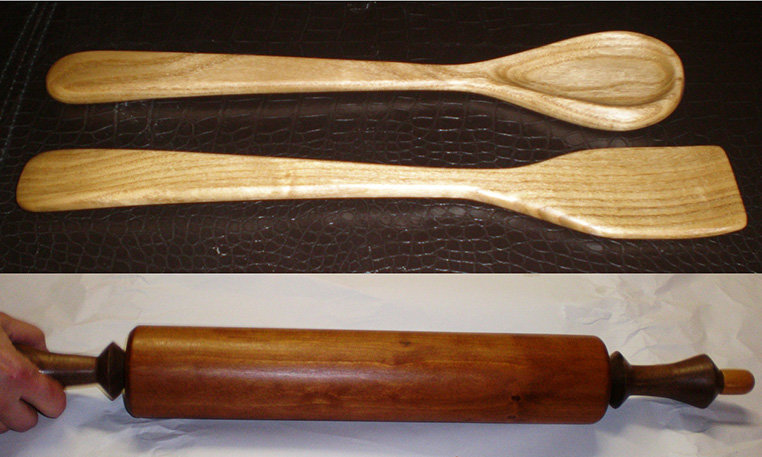 “I ended up reattaching the bowl with the same 4″ x 4″ x 3/4″ red oak spigot without the paper in between, and it worked just fine. Third turns a charm!”…Ron Thompson

For the past 2 years, Ron has been doing a lot of turning, learning from the hands of Jim, creating segmented bowls, rolling pins, paper towel holders, wooden utencils and pens.

Ron keeps getting better with each segmented turning along with his finishing techniques. His very first turning was a poplar and walnut segmented bowl.

I was the fortunate winner of Ron’s #35 segmented bowl creation at a Charleston dance earlier this year. This is made of beech and black walnut.

Initially Ron said, “I used a 2″ diameter poplar spigot, which was too small of a block for this size bowl and  the bowl came flying off the lathe. The second time, I took the advice of a co-turner and tried a 4″ diameter red oak spigot with paper in between the glue seal for easier later removal, but it came off earlier rather than later and took a spin across the shop too!”

We asked Ron, “This was still in the roughing stage right?”  He exclaimed, “NOOOOO! It was in the final finishing stages and I had to go a bit deeper fixing a few gouges left in the “frisbee” bowl!”

Ron continued, “I ended up reattaching the bowl with the same 4″ x 4″ x 3/4″ red oak spigot without the paper in between, and it worked just fine. Third turns a charm!”

Ron tells us about his finishing process in this video, 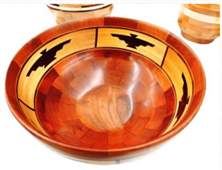 Ron said, “Although the feature rings are more complicated and assembly tedious, I love segmented turning because of the challenge and gratification or self-accomplishment when the feature inlay is done correctly, and the final result is a different and great looking piece.”  His next attempt is to include an aesthetic feature ring similar to this black walnut, cherry and maple “Thunderbird” design, created by Tom Vensel, shown below. Ron also stated, “I like the “Zig-Zag” feature rings and how they develop into the final shape.”

If you would like Ron to create a special turning for you, please contact him at ronetsr@hotmail.com.

Ron has donated a great amount of his work to the Ravenswood West Virginia Octoberfest fund raiser, also the Senior Citizen’s Christmas Dance in Charleston, as well as to many friends and family members. Great stuff Ron, keep forging ahead with new designs, perhaps we’ll see you in the American Association of Woodturners (AAW) Show some day!

We’ll have an upcoming blog on how to make segmented turnings, so stay linked!