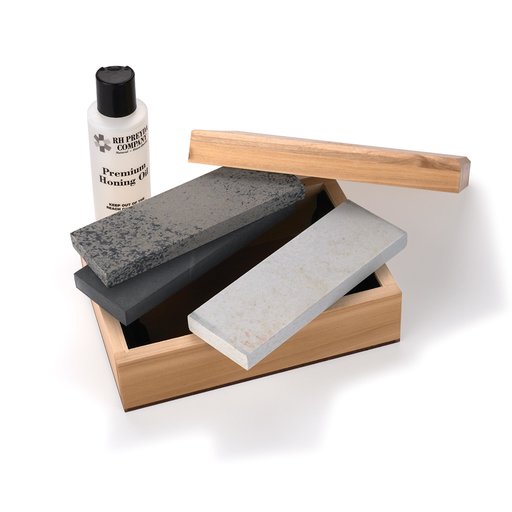 5.0 out of 5 stars (1) Review
Write a Review
In Stock check in-store availability

This Arkansas Stone combo can handle your sharpening needs from start through to sharpest edge. This is a great set for knives, plane blades, chisels and, for that matter, anything requiring an...

This Arkansas Stone combo can handle your sharpening needs from start through to sharpest edge. This is a great set for knives, plane blades, chisels and, for that matter, anything requiring an edge. This set includes three 6" x 2" x 1/2" stones – Soft, Hard and Hard Black Arkansas Stones – in a wood storage box with a bottle of light mineral oil.
Start on the Soft Arkansas (400-600 grit) to create an edge, then switch to the Hard (800-1000 grit) to further refine, and finally, polish on the Hard Black Arkansas (2000-3000 grit) to create a perfectly sharp edge. Stones can be used with or without lubrication, but we suggest light oil, which will keep the stones’ surface fresh and free from glazing that could potentially diminish the stones’ performance.

RH Preyda Arkansas Stones
RH Preyda’s 100% natural Arkansas stones are made from Novaculite quarried in the Ouachita Mountains, near Hot Springs, Arkansas. The unique cryptocrystalline structure and density are the keys to the stones retaining their effective abrasion characteristics and shapes with what amounts to minimal care. 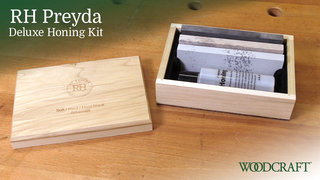 This sharpening stone kit is a great deal on 3 grits of Arkansas Stones with a bottle of honing oil, all in a nice little storage box.