SAVE 20% ON SELECT STARRETT BANDSAW BLADES! 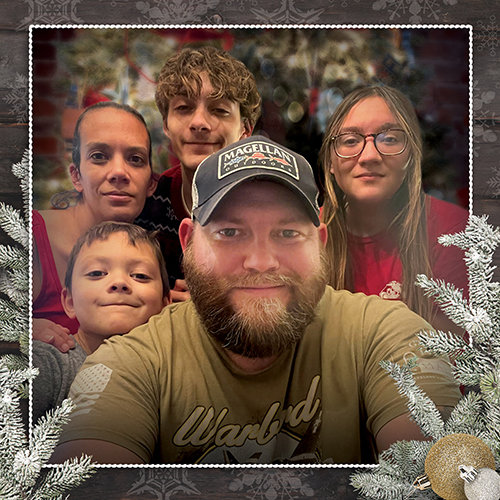 Sgt. Mike Hulsey and his family, son Wyatt beside him and from left in the back, wife Meaghan, son Austin and daughter Elizabeth.

A wounded veteran who served nearly 10 years in Iraq and Afghanistan and his family are being honored by The Patriot Woodworker organization with a Christmas meal and presents for the children. Four corporate sponsors, including Woodcraft, are providing prizes for the organization’s fundraiser to finance the project.

“Every year we adopt a Wounded Warrior or Gold Star family for Christmas through Operation Ward 57,” Patriot Woodworker founder John Morris said. “We sponsor a raffle, supported by generous businesses, to honor the veteran and his or her family with food and gifts. So far our raffle participants have raised about $2,000 each year, and we hope that will hold true this year.”

Raffle tickets are available in seven different amounts from $2 to $100. A $2 ticket enters the purchaser’s name one time in the random drawing; the other six dollar amounts offer multiple drawing entries from 3 to 110. Tickets will be available through Dec. 31, 2021.

Nine prizes include: from Woodcraft, a two-year subscription to Woodcraft Magazine, a Florip Toolworks 9" Dovetail Saw and a ONEWAY Bowl Steady; from Laguna, a 14|12 Bandsaw; from Easy Wood Tools a Full Size Finisher and a Mid Size Finisher; and from General Finishes, three eight-can selections of various finishes .

Winners’ names will be randomly drawn after the benefit closes and announced in about 48 hours. To learn more or to donate, visit thepatriotwoodworker.com.

“Woodcraft appreciates the opportunity to partner with The Patriot Woodworker to say ‘thank you’ to Sgt. Mike Hulsey during this holiday season,” Woodcraft President and CEO Jack Bigger said.

Family – Mike and his wife Meaghan have been married 19 years and have three children, Austin, a college freshman; Elizabeth, who will soon turn 17; and Wyatt, who is 7. The Hulseys reside in Knoxville, Tennessee.

Military Service – A month after Mike Hulsey began his US Army training as a generator mechanic the 9/11 attacks forever changed his country and initiated events that would lead him to nearly 10 years of overseas deployments, primarily in the Middle East. In a matter of months he was attached to the 1st Marine Corps division, an infantry company, which was sent first to Kuwait and then to Baghdad as the invasion of Iraq began.

He reenlisted with the option to change his career field and ended up reclassified as an NBC man. He volunteered to go to Fort Campbell where he received NBC (Nuclear, Biological and Chemical) Warfare Training and eventually was in Baghdad again, a deployment marked by three IED attacks and a house-to-house search that turned into a violent attack in which Hulsey and an interpreter were wounded.

“We were finally able to eliminate the threat and moved out to receive aid,” Hulsey said. “I would later be awarded a Purple Heart for injuries related to this incident; however, unfortunately it was an IED that truly injured me during this deployment.”

When he returned to Fort Campbell, Hulsey said he saw a spine specialist for lower back and hip pain. He was not able to recover and the condition worsened. He eventually deployed with the same company but to Afghanistan. He was assigned to the Tactical Operations Center and the radio until his condition improved or he knew what a surgeon could do for injuries.

At the end of the third deployment he was medically discharged and later had spinal surgery to correct ruptured discs in his back and to replace both hips.

Sgt. Mike Hulsey and his wife Meaghan earlier in his military career.

Elizabeth, Austin and Wyatt Hulsey team up to do some baking.

Retirement – Now retired, Hulsey enjoys time with his family, including service dog Crocker, fishing, working at his fly tying bench, or making duck calls (see photo below). He also does woodworking with Meaghan, including wood shaving kits (see below).

One of the duck calls Sgt. Hulsey makes.

Woodworkers Mike and Meaghan Hulsey create wood shaving kits like this one.

The Patriot Woodworker is a woodworking community with an emphasis on sharing and learning the skilled craft of woodworking and all of its related disciplines.