Quantity, as well as quality, counts in the annual Makerspace Contest on Instructables.com.

With that in mind, the Canadian C&M (CraftersAndMothers) five-member team put its collective creativity in high gear to produce 263 projects for the contest that was open for entries from June 1 through Aug. 31, 2017.

PHOTO: C&M Team members created this $5 DIY Polygonal Globe, along with 262 other Featured Instructables, to win the Makerspace Contest Grand Prize. After removing the original globe, 25 straws were used to form the polygonal shape, with paper shaped into continents for marking travels with tiny flags. 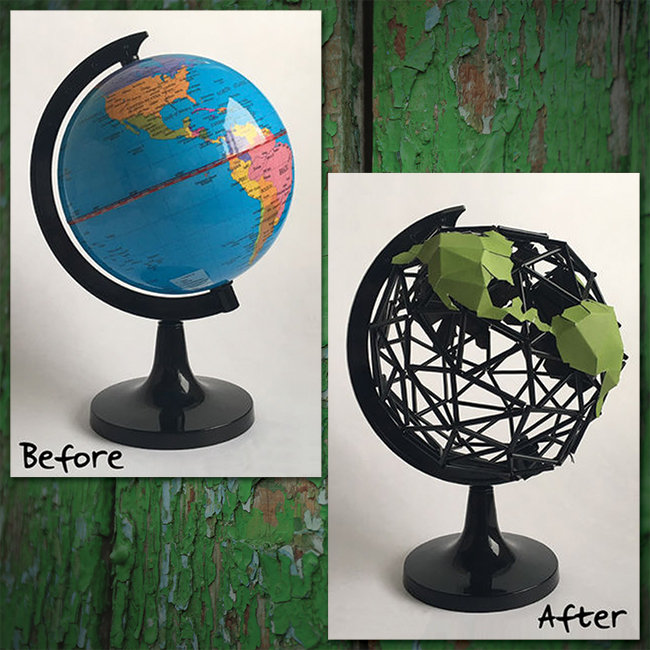 A Makerspace project can be anything, as long as it includes multiple steps for construction, with photos and explanatory text. Entries are screened to determine which ones qualify as Featured Instructables.

“The community managers look at all the Instructables that come in and decide whether they should be featured, based on criteria that focuses primarily on excellent documentation and reproducibility,” Instructables campaign manager Nicole Smith said. “It means to us that it is an interesting project that is well documented.”

“The diversity of projects in this contest is amazing and reflects a wide range of creative interests among the makers, who live all around the world,” Jack Bigger, vice president of sales and marketing for Woodcraft, said. “Woodcraft congratulates the winners.” 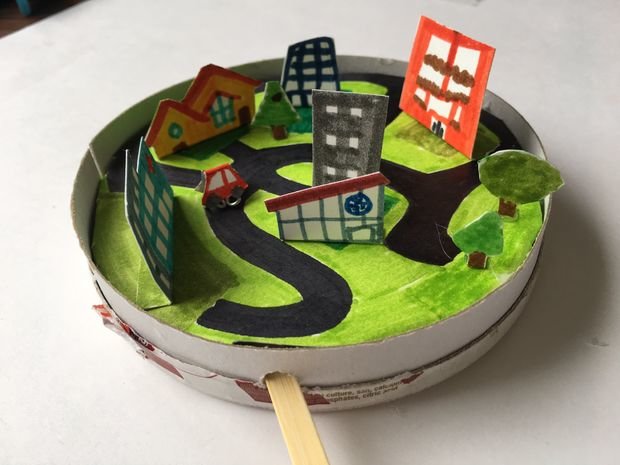 C&M team members will receive approximately $25,405 worth of tools for their creative efforts. A complete list of the tools may be viewed on the contest website Makerspace Contest.

Among other Featured Instructables created by the CraftersAndMothers are a Tiny City with Moving Car and the Articulated (jointed to allow bending) Baby.

The city is crafted from paper, except for the car and a magnet that is attached to a stick inserted in the side of the city’s base (a small box). Movement of the stick “drives” the car. Roads, buildings and trees are cut from cardstock and glued to the base.

The baby with joints for mobility was created to fill a void – no baby available for a Barbie doll “mother.”  A small baby doll was used to make a mold from polymer clay, and simple sculpting tools were used to create the body parts. 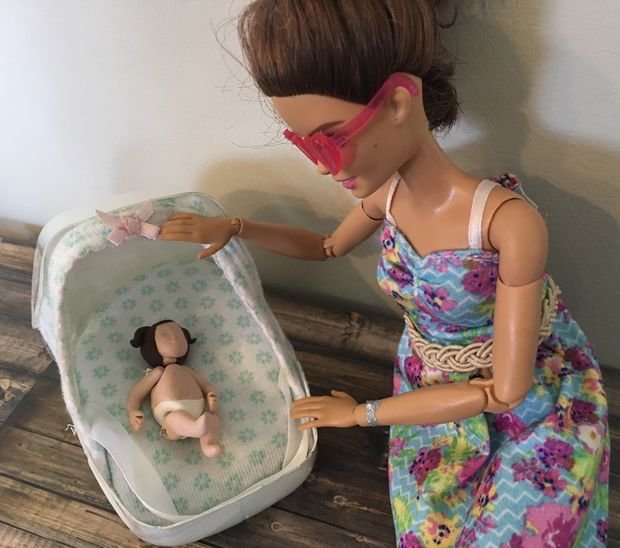 Other top team winners and their total Featured Instructables include:

LightHouse’s 215 Featured Instructables include Fix Your Broken Headphone Jack. The narrative notes: Music is becoming more and more accessible by different devices like iPods, Phones, etc., and the most common way to listen to music is with headphones. Because everyday use and the vertical alignment of headphone jacks cause them to wear out and stop working, at some point a replacement will be necessary. If you have a good pair of headphones with a broken 3.5mm jack, this Instructable will help you replace it.

One of the Enceladus team’s 206 Instructables is this DIY Metronome for under $10.

A metronome produces an audible beat—a click or other sound—at regular intervals that the user can set in beats per minute (BPM). Musicians use it when practicing on a musical instrument.

Growing Termites for Feeding Chicken is one of the 149 Featured Instructables created by the Joseanice team. The project shows how to grow termites – a tasty and nutritious food for country chickens – in a mud pot, an old practice of poultry keepers in India.

Best Individual: Niko from Slovenia for Rewinding and Renovating of the Electric Motor

Niko, a RoboSap team member, demonstrates how to rewind and renovate an old electric single-phase electric motor in this Instructable.

In his narrative, Niko shares that he bought the motor cheap at a garage sale, knowing the motor was burned out, but he was interested in renovating it. He documents his steps – disassembling the motor, removing the bearings, making a winding diagram, rewinding the motor, choosing the right capacitor and reassembling it with new bearings. 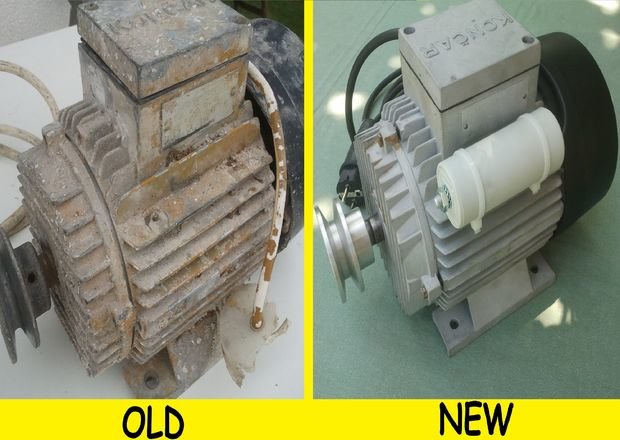 Best Individual Use of Fusion 360: Britt from Germany for Qi Green Lantern Charger

Creator Britt writes in his narrative, “I wanted to have a Green Lantern Power Battery for quite some time. Sadly the original DC Collectibles ones are ridiculously expensive. After a bit of research I decided to build my own. Instead of just copying their functionality I decided to make it actually useable as a cell phone charger. You can simply place your phone onto it, and it will be loaded. Another functionality that the Power Battery has is that you can turn on the light with a ring.”

Best Individual Use of CAM in Fusion 360: Rhett from the U.S. for Wood Inlays with Fusion

In this project, Rhett provides instruction for using Fusion 360 to make wood inlays that traditionally are the result of careful craftsmanship and hours of tedious cutting and carving. He explains in his narrative that Fusion 360 is a powerful all-in-one tool that incorporates all forms of 3D modeling in one easy to use and free package.

“This Instructable will describe a method for making wood inlays that I have found to work well. A design is imported, modeled in CAD, and then loaded into the built-in CAM environment to generate toolpaths for a CNC machine,” he writes.

Best Individual Use of Sculpting in Fusion 360: Veronica from the U.S. for From Sketch to CAD to 3D Printer.

Maker Veronica writes in her narrative, “When I’m staffing at the Invention Studio, I like to teach skills that aren’t typically practiced among engineering students – particularly sketching. While teaching a colleague to do quick sketching by using helicopters as an example, I accidentally came up with a cool-looking concept. Concept drawings make for great 3D printable models, but they are often perceived as impossible to translate into a 3D medium. With a little time and some basic knowledge of Fusion 360, anyone can take concept drawings into CAD – where you can use them for 3D printing cute models, decorative electronics housings, or whatever remixes that you dream of.”

Best Individual Use of CAM in Fusion 360: Wood Inlays with Fusion

Best Individual Use of Sculpting in Fusion 360:  From Sketch to CAD to 3D Printer 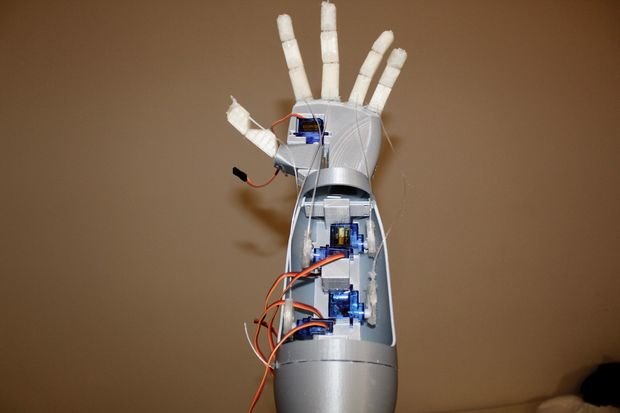 The 3D Printed Robotic Hand with Bluetooth Control project by TechMartian, a member of the second place Enceladus team, is representative of many of the Makerspace Contest projects that used or taught modern technology.

According to the project narrative, this is a fully 3D printed and actuated robotic hand and arm which can be applied to a multitude of use cases like a prosthetic hand, or just a third “hand.”

The maker was inspired by the “Build a Hand” initiative on the website Enabling the Future, where you can find a collection of different 3D-printable assistive devices that are free for download and fabrication by anybody who would like to learn more about the designs or fabricate a device for somebody in need. A second inspiration was an animatronic hand. Animatronics, I learned, is using electronic machines or robots which can animate or mimic human gestures.

To learn more about all the winners, entries and all the prizes, click here Makerspace Contest.

Instructables.com is described as The World’s Biggest Show and Tell. It attracts 30 million plus viewers each month to its web-based documentation platform that allows passionate creators to share what they do and how they do it, as well as learn from and collaborate with others. Besides offering a place to showcase and store new projects, Instructables also sponsors ongoing competitions. For more information, click here Instructables.