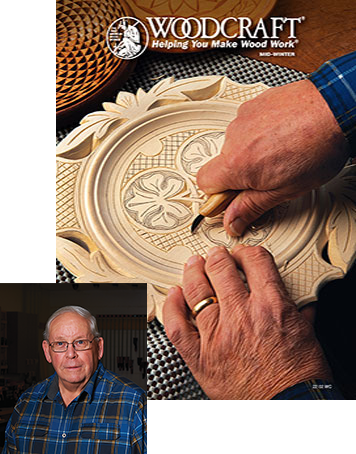 Fred Williams is a hands-on creator with a “learn by doing” education from his parents. He enjoys the pleasure of using hand tools with the “I did this” attitude, creating chip carving artwork, caricatures, box making, furniture, quilting, and much more.

Fred’s father, Fred “Arden”, never went past the eighth grade, and was a solid, practical man that gave Fred the tools to be a patient, inspiring soul to help others. Fred explained, “Although we had an old Craftsman table saw, dad still used hand tools 90% of the time in the shop.” Fred also learned how to sew and make quilts from his mother, Maxine. During one of the quilt builds, Fred created and sewed in one patch, and wanted everyone to know that he did it! Asking for a Sharpie marker to proudly initial that particular square he made, mom denied Fred, and he quickly learned that signing his work only pertained to woodworking! Fred commented, “Mom didn’t like taking money for her quilts. Although she wouldn’t always turn it down if offered, but would rather give it away, bringing some happiness to the quilt admirer.” Fred continued, “She once made a quilt for my wife and I, and would not take a penny for it. I secretly slipped $500 bucks into her favorite pattern book, and to this day, I don’t know if she ever found it!”

(Fred's handiwork is featured in our 2022 mid-Winter Catalog, which you can find and subscribe to online or at your Woodcraft stores nationwide.)

Fred being the oldest of two brothers and two sisters, who are equally creative in Buckhannon WV, paid strict attention to Arden’s hands on tutelage approach and gained much knowledge through the years. Fred assisted Arden in the build of their home as they could afford it, “piece-by-piece” with a “no-debt” plan. Fred explained regarding growing up, “You better listen good the first time, because you didn’t get a second chance explanation.” During Fred’s high school years, he would bring his algebra and geometry problems home. Fred stated, “Within 30 seconds each time, dad had the answer, but didn’t share the process, telling Fred, “That’s for you to figure out!”. Fred told us, “Other hard-knock tasks included moving manure piles from one spot to another, and back to the initial spot, just to teach a lesson. Dad sat Fred down and explained, “You are the oldest and will set the example for your brothers and sisters, live up to it.” 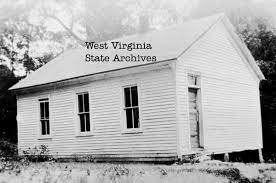 Fred respectfully attributed all of his upbringing to his parents. Not having any formal industrial arts education, Fred picked up all of his woodworking knowledge, learning from Arden. Fred attained his education degree at West Virginia Wesleyan College, which lead to a 34 year career in education, teaching all core subjects and PE for 4th, 5th and 6th grades. Fred worked for three different schools in Upshur and Wood Counties, beginning with the last one-room school house (left) for three years, followed by Blennerhassett Middle School for 5 years, and finally Madison Elementary for 26 years. He thought about getting his Masters in Administration, but preferred the one-on-one continuous interaction in working with his students.

Previous students have often come back for a visit with Fred at the Woodcraft store to thank him for working with them through the years. Fred stated, “Students don’t care how much you know, until they know how much you care, so that’s what I have tried to live by.”

Fred has enjoyed woodworking for 61 years, and working at Woodcraft for 22 years, both as an assistant manager and employee until retirement. His take-away went from students first to customers first with respectful customer care, attention, sharing knowledge, and using his hands-on experience. He has also taught Woodcraft chip carving classes. Fred told us, “Sharing his knowledge was the fun of the work.” And that his biggest contribution was showing an interest, helping everyone improve their woodworking abilities, and building customer relationships.

You might just see Fred at the “Carving on the Porch” events at Woodcraft of Parkersburg, or at the Geppetto’s Woodcarvers’ Club, Turning Tuesdays at Codger Lodge, and on social media, Old Men with Knives carving group. When the weather is warmer, stop by Fort Boreman Park in Parkersburg, where you may find Fred and Linda, chip carving under the picnic shelters. And when they are not there, you will certainly find remnants of chip carved shavings from their handiwork!

Above are several of Fred & Linda's projects including a chip carved coaster tray with quilted coasters, a nice combination of talents!

Today, Fred creates handcrafted items that are not only ornamental, but prefers utilitarian projects. He enjoys family life with his wife Linda, daughter Megan, four siblings and two grand-daughters, creating furniture, carvings, and gifts for everyone. Oh, and in between chip cuts, Squirt the cat gets some love too!