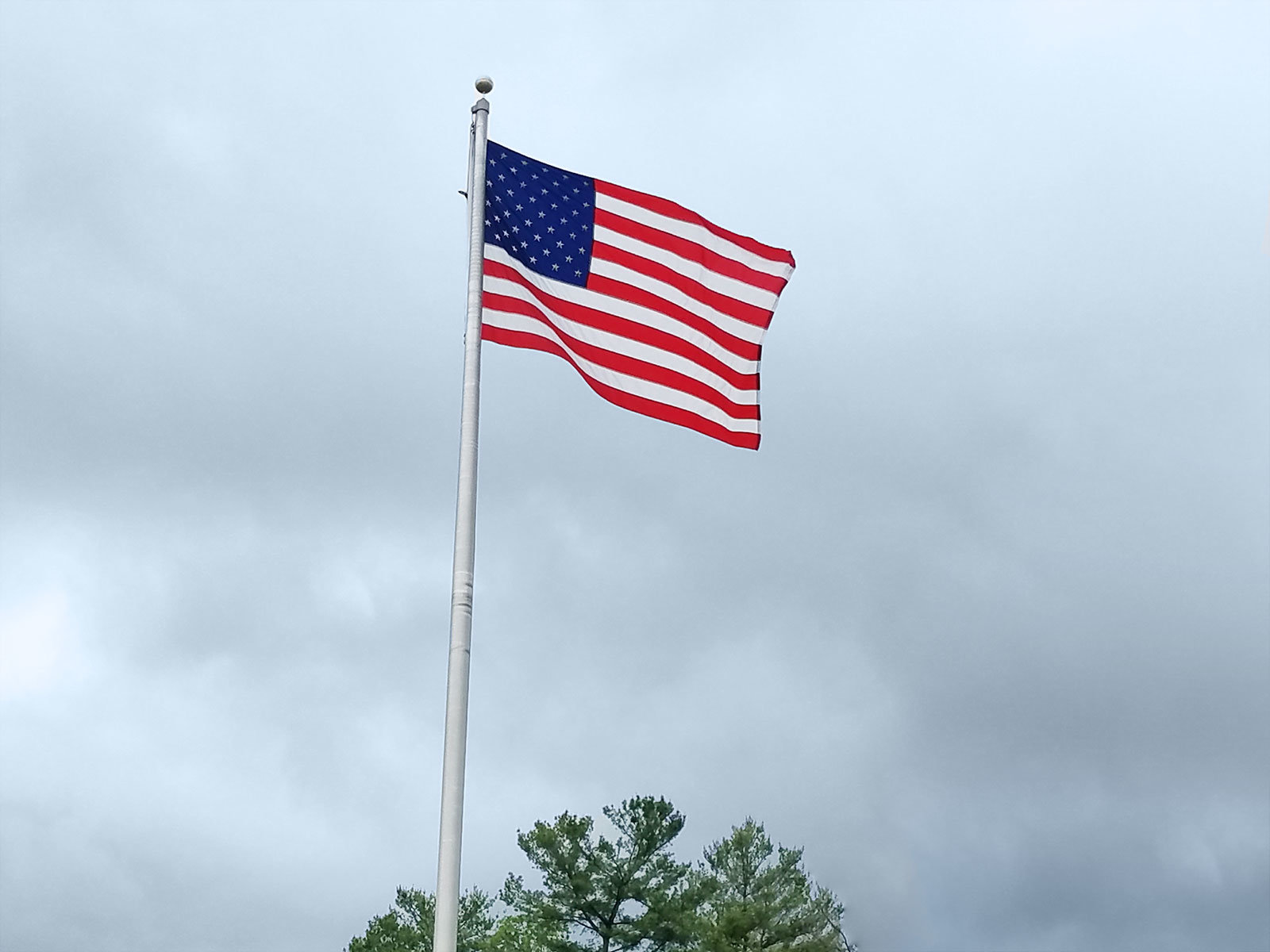 Photo: The US flag flies over the grounds of the Woodcraft corporate offices.

On June 14, 1777, the Continental Congress passed an act establishing an official flag for the new nation: “Resolved, that the flag of the United States be made of thirteen stripes, alternate red and white; that the union be thirteen stars, white in a blue field, representing a new constellation.”

Between 1777 and 1960 Congress passed several acts that changed the shape, design and arrangement of the flag and allowed stars and stripes to be added to reflect the admission of each new state. Today the flag consists of 13 horizontal stripes, seven red alternating with six white. The stripes represent the original 13 colonies, and the stars represent the 50 states in the Union. The colors of the flag are symbolic as well; red symbolizes hardiness and valor, white symbolizes purity and innocence, and blue represents vigilance, perseverance and justice.

More “Flag Facts” are included at the end of this blog.

Make a Flag or a Flag Holder

For those who would like to celebrate Flag Day or Independence Day by making something special, Woodcraft suggests three Instructables.com projects – two flags and a flag case.

Instructables.com is described as The World’s Biggest Show and Tell. It attracts 30 million plus viewers each month to its web-based documentation platform that allows passionate creators to share what they do and how they do it, as well as learn from and collaborate with others. Besides offering a place to showcase and store new projects, Instructables also sponsors ongoing competitions. Woodcraft has sponsored some of these contests. 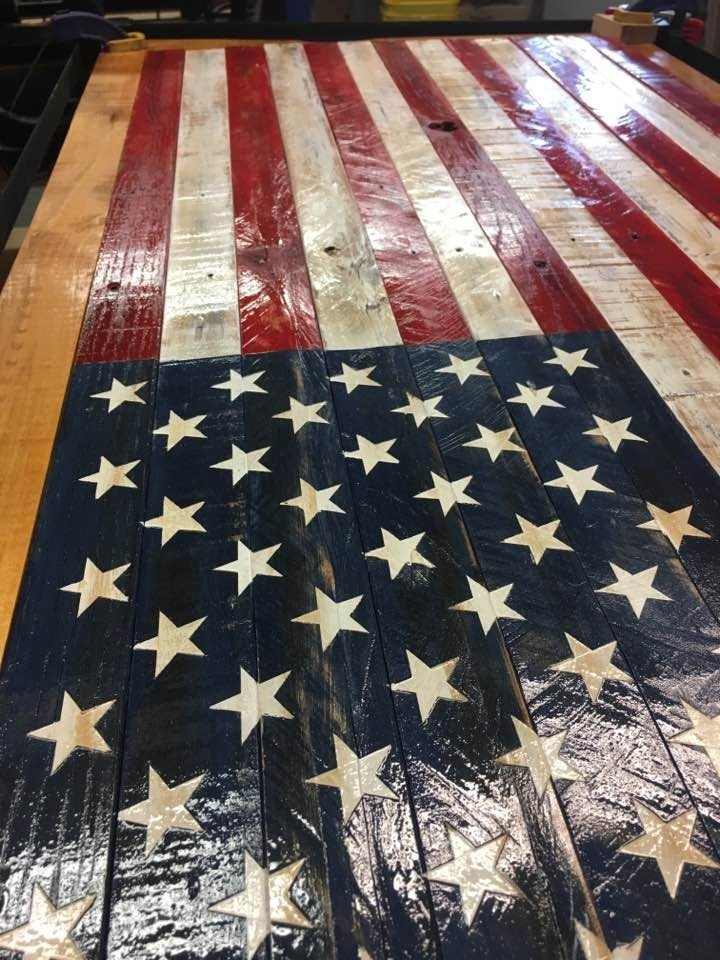 Photo: An American flag made from wooden pallet pieces and finished to look like an antique.

A US Navy veteran who goes by the online name of CarSal created this flag from pallet wood.

“I would see these types of flags; they would range from $200-$300 and were made from pine and painted to look old. So I thought to myself, I can do that and so can you. Only difference is our flags will be real distressed hardwood,” CarSal wrote in his Instructable project instructions.

The two methods for adding the stars are:
1-Buy 1" stars, paint them and glue them on the flag
2-Cover the blue star field with painter’s tape and using a stencil cut out the stars with an X-ACTO knife. Then paint the cutout sections – two light coats work best.

During the finishing step, directions are given for creating the “antique” look.

How To Make An American Flag 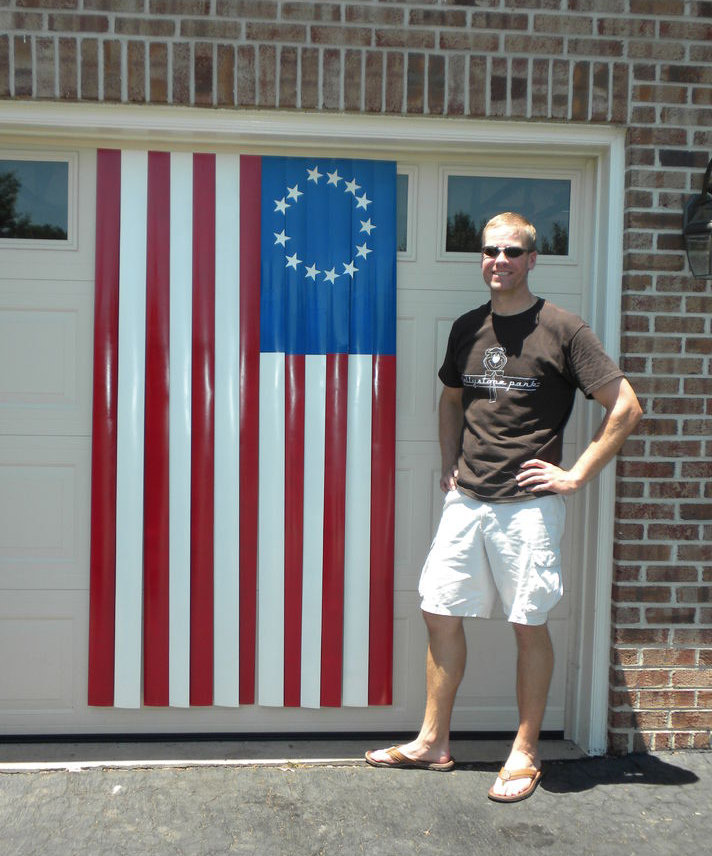 Photo: An American flag made from blinds.

Samfelis (Instructables.com name) offers another plan for making a flag – from blinds!

In the introduction to his project description, Samfelis writes:
“After reading this Instructable, you’ll have the power to make your very own American flag, using those vertical blinds that have been gathering dust in your basement …These instructions could be used for making a flag from horizontal blinds as well; you would just need to adjust your layout accordingly.

“Total cost for this project?  About $30, depending on how much paint you go through (of course, this doesn't take into consideration the money spent on blinds if you had to purchase them).”

*While you must use the plastic kind of blinds (vs. fabric), you can pretty much use whatever color you want. That being said, it’s much easier to start with a light color so that you’ll only need to cover it with a coat or two of paint.

In the section on Making and Painting the Stars, Samfelis explains: “The stars were the hardest part of the flag.  I was unable to find some at the store that were the right size, so I had to resort to making my own.  (This was actually a good thing because it reduced the cost of the project.)

“At this point I should tell you that you should probably decide on your star layout before cutting out all 50 stars.  I ended up cutting out 50 stars, but eventually decided on a Betsy Ross Flag design that only required 13 stars (arranged in a circle on the Union).

“On the rest of the blind, I traced my template star and cut out 50 stars using a pair of heavy-duty scissors (I then iced my hand and took a couple of Advil, as cutting out all those stars was punishing).

Click here to view complete instructions for building this flag. 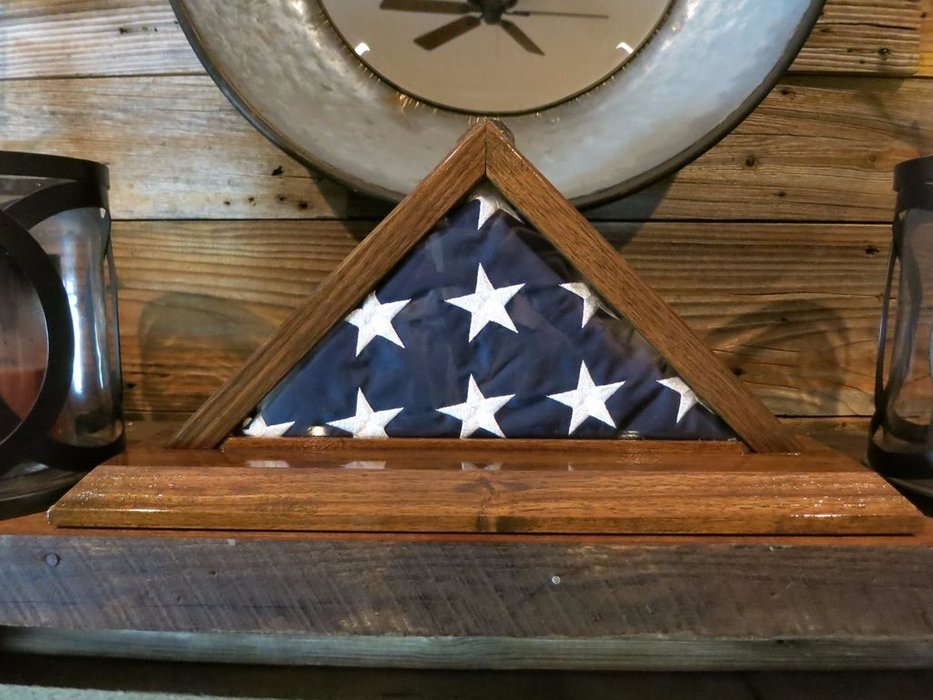 MissionSRX (Instructables.com name) built this flag case. He is an engineer by trade and an amateur woodworker and author in the off-hours, according to his online information. He also notes: “Most commonly, I build flag boxes for retiring military members and occasionally gifts and furniture when the opportunities arise. Outside of a middle school shop class, I’m self-taught and have the pile of broken projects to prove it.”

In his introduction to building the project, MissionSRX writes:
“For this project, I’ll be demonstrating the construction of a flag box constructed from 3/4" walnut entirely by hand. Seriously, like no power tools whatsoever. I’ll be hacking out a mitered dovetail joint with proud tails for the top, which will add interest as well as hide the notch for the back and the glass. The sides will be attached to the base with a few screws from the bottom, and the back will be attached with turn buttons.

“There is a wide spectrum of thought and opinion about the time and application for hand tools in today’s world. For the purpose of this project, I’m referring to ‘Hand Tools’ to mean any instruments that do not function by power. Blogs and workshops discuss at length the wonder and experience of using hand tools to build their projects and do things how they used to be done. On the other end of the spectrum, Norm Abram on The New Yankee Workshop has built projects where the only hand tool he used was a utility knife.

“What’s the right approach? For all of the discussion, I’ve never seen anything that would convince me our ancestors purposefully did things the hard way; i.e., they did things the way they did because there was no better way. A saw, chisel, plane and some beeswax was all they had, so that’s what they used.

“So why would we do things the hard way? To prove our skills. To understand the principles that we’re incorporating. To gain appreciation for how easy things are now and to add an extra personal touch to your project. Everyone knows homemade beats store-bought.

“One more reason…cost. Not everyone has $20,000 sitting around to outfit a pole barn with the Powermatic demo studio. I started down this road in middle school, and all I had was a miter box and a backsaw. Over the years, I’ve learned that you don’t need much more. With $50 and a trip to Lowe’s, you can get all you need to make a project that will last a lifetime and mean the world to someone special.

“This doesn’t mean you can get away with sloppy construction. We’ll need to be precise and check our progress constantly if we want to succeed. Now’s not the time for messy, chipped-up, unsquare, middle school shop class projects.” 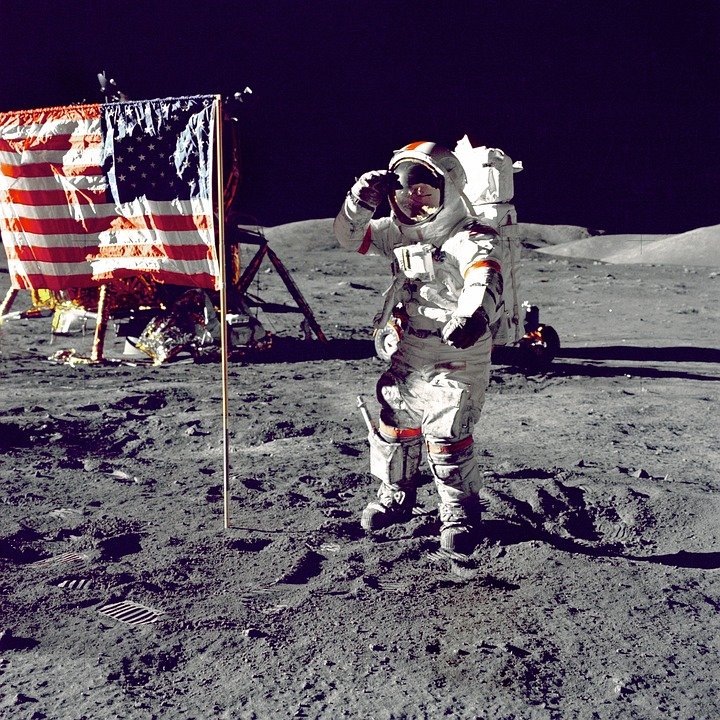 Photo: An Astronaut salutes the US flag in space.

The origin of the first American flag is not known for certain. Some historians say it was designed by New Jersey Congressman Francis Hopkinson and sewn by Philadelphia seamstress Betsy Ross.

•The flag has changed 63 times.
•The first time the American flag was flown overseas on a foreign fort was in Libya over Fort Dern, on the shores of Tripoli in 1805.
•The flag is often called The Star-Spangled Banner, a reference to the song Francis Scott Key wrote after being inspired by the sight of the flag flying over Fort McHenry in Baltimore during the British bombardment in 1814. The song became our national anthem in 1931.
•William Driver, a sea captain from Massachusetts is responsible for inspiring the common nickname, Old Glory, for the American flag. He owned a large, 10' x 17' flag that he was given before one of his voyages. As he watched the flag open to the ocean breeze for the first time, he exclaimed “Old Glory.” He retired to Nashville, Tennessee, taking his flag with him. As the Civil War spread and Tennessee seceded from the Union, Rebels determined to destroy his flag – but they could not find it. After Union forces captured Nashville on Feb. 25, 1862, and raised a small American flag, people began asking Driver about his large flag.  He then ripped open the seams of his bedcover to reveal the now famous flag. Soldiers accompanied Driver to the capitol where he replaced the small banner with “Old Glory.”
•In 1909, Robert Peary placed an American flag, sewn by his wife, at the North Pole.
•Flag Day was officially established by a Proclamation of President Woodrow Wilson on May 30, 1916, but it was not celebrated throughout the nation until after President Harry S. Truman signed an Act of Congress on August 3, 1949, that designated June 14 as National Flag Day.
•In 1963, Barry Bishop placed an American flag on top of Mount Everest.
•In July 1969, the American flag was “flown” into space when Neil Armstrong placed it on the moon. Flags were placed on the lunar surface on each of the six manned landings during the Apollo program.

(Flag Facts in this blog are from these websites: usflag.org, pbs.org, usa-flag-site.org, and allstarflags.com.)