Woodcraft Scholarship to The Krenov School Goes to California Man 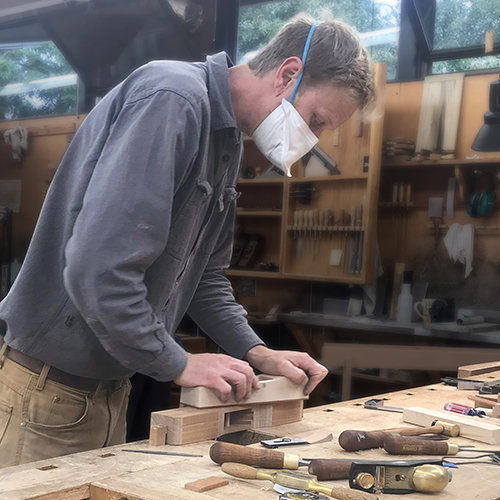 Ben Lindorfer planes some machine marks from the jointer plane he is making as a student at The Krenov School.

Benjamin Lindorfer, an Inglenook, California, resident, is the latest student at The Krenov School in Fort Bragg, California, to receive a Krenov Foundation Scholarship funded by Woodcraft.

The son and grandson of residential contractors, Lindorfer grew up building things. He went to work for his father after high school and learned the family trade, which included some cabinetry.

Eventually his interest in woodworking and a lack of confidence in his carpentry skills led him to visit The Krenov School. The supportive interaction between students and instructors appealed to him, so he began classes this summer and is now in his first semester of instruction.

The Krenov Foundation, established in 2014, awards several substantial scholarships each year to students attending The Krenov School, which was founded in 1981 by the late James Krenov, a highly acclaimed cabinetmaker, author and teacher. Read more about the foundation at thekrenovfoundation.org.

The Krenov School, a part of Mendocino College, offers an intense fine woodworking and cabinetmaking program. Although machinery is used at the school, the focus is on teaching students to use hand tools and learn to design and execute a project on their own. Learn more at thekrenovscohol.org and the school’s Facebook page.

“Congratulations from Woodcraft to Ben Lindorfer as he pursues excellence in his fine woodworking skills,” President and CEO Jack Bigger said. “It is encouraging to know that The Krenov staff offers a welcoming environment for learning this age-old craft that is still relevant today.”

Ben said he grew up with woodworking and tools and always liked going to galleries and seeing the furniture that people built.

“There was one out in Half Moon Bay, near where I grew up” Lindorfer said, “and I remember a table that had a wrinkle at the edge, like it had a tablecloth, but everything was out of wood. How did they do that? How did they fit the cabinets together, without any screws? It was magical. It was a mystery.”

So far Ben has built an entry table, desk, some small bowls, two hand planes and saw horses. He made the Madrone horses with wedged tenons during the fall class. The Maple smoothing plane and jointer plane were summer projects that featured hickory pins and Hock irons.

Ben also started a Desktop Cabinet during the summer session. He is building it from Madrone, except for Bay Laurel drawer sides, back panel and door. The Bay Laurel is locally grown and harvested. Cabinet features include: through tenon carcass, half-blind dovetail drawer fronts, and frame and panel back.

“I’ve already learned more about hand tools and joinery than I learned in all my previous years of construction,” he said. “The majority of what I’ve done in woodworking has been basic cabinets for kitchens and bathrooms, and replacement windows. I really do feel like I'm just starting out with fine woodworking.” 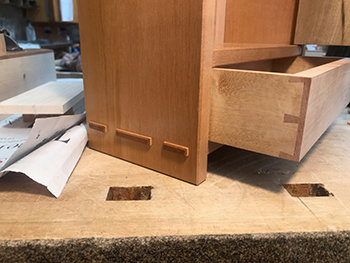 Ben said he appreciates how the instructors treat students – as individuals.

“They meet us where we are, and they teach us,” he said. “They see where I am with my dovetails, with sharpening, with planing, and they know how much to correct and how much to encourage,” Ben said. “It's the best environment. When I'm at school, I feel like I belong.”

So what’s ahead for Ben? In a month, he plans to marry his fiancé, a writer, and finish his study at The Krenov. Next he is considering a career in cabinetry and looking forward to starting a family.

“I hope to spend a lot of time in a shop with my kids,” he said.