CHECK OUT OUR WOODRIVER T-TRACK SELECTION 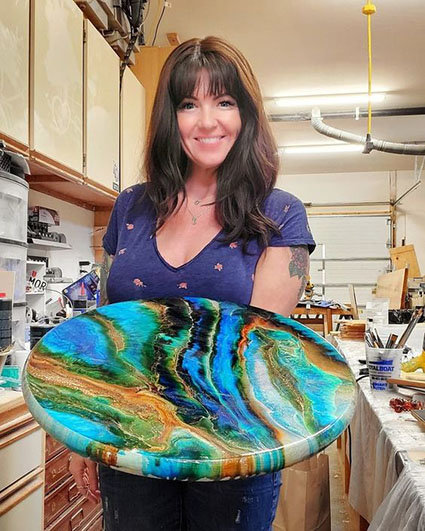 Jess Crow is an immensely popular resin artist and teacher from Anchorage, Alaska, as well as the owner of Crow Creek Designs, mother of three grown daughters and a public speaker about social issues.

Watching her teach the basics of resin work, one would never guess the truly daunting circumstances she has overcome to achieve success as a mother, artist, builder, business owner, teacher and advocate for social change.

Born outside Boston, Jess grew up 25 miles north of Fairbanks, Alaska, on a mountaintop called Haystack.

Her childhood home lacked running water, electricity and indoor plumbing, and she was sexually abused on a routine basis. At age 12 she recounts “finding my voice that now plays a huge role for me today.”

At age 13, she said she met the father of her daughters. The first was born when she was 16, and the family moved to Anchorage. Two more daughters were born there, one with medical issues that nearly claimed the child’s life more than once and sent Jess on a 10-year search for answers. The child was finally diagnosed with Ehlers-Danlos, a rare genetic syndrome that includes a group of hereditary disorders of connective tissue that vary in the way they affect the body. Ultimately, Jess was also diagnosed with the disease, which explained significant health problems that had plagued her for years.

“While Ehlers-Danlos isn't curable, we are now able to treat each body system that is struggling independently with some success,” Jess shared.

She dropped out of high school when her first daughter was born, but Jess obtained her GED at 18 and went on to take courses in the medical field remotely. “I needed to better understand the words the doctors were saying to me in order to care for my daughter,” Jess explained.

“Learning to speak up in extremely stressful situations (the abuse) helped me be a great advocate for my daughters while being a teen mom in a sea of disapproval,” Jess said.

Although Jess and the girls’ father could not make their marriage work, she said, “We have successfully managed to co-parent our girls to the amazing humans they are today! They are 26 (almost), 21, and 18 (almost).”

“I would have to say that those early experiences and ensuing limited income forced me to be a tinker, a maker, a builder,” Jess said. “Living in Alaska has its own challenges with supplies, so the added weight of being, frankly, poor forced me to always think outside the box for things I wanted – from the backsplash I did in my first home with broken pottery I collected to the first coffee table I built out of thrown away packing dunnage.”

Jess can’t remember starting woodworking but said it has always been in the background. A kind of “aha” moment was when she built the dunnage coffee table but did not like it for her room and posted it on Craigslist. “It was met with an overwhelming response – people wanted it! I had done a unique paint job on it, reminiscent of the Aurora Borealis. Turns out people were hungry for artwork on furniture,” she said.

She started flipping dressers in the shabby chic style that is still popular today but with a Jess spin on it – artwork. When dressers to flip became hard to find, Jess began learning to build furniture that she could apply art to – with no formal training in woodworking and art and viewing mistakes as “happy accidents.”

Jess launched Crow Creek Designs in 2015, but because of her health and a near death experience, she was forced to take an almost four-year hiatus. About three years ago, Jess said she realized that her role as mother that had defined her since age 16 was diminishing and she “had no idea who she was.”  Jess said that day she began a journey on social media, “devouring anything I could about building, making, artwork, and of course, social media and what in the world a ‘hashtag’ was.” 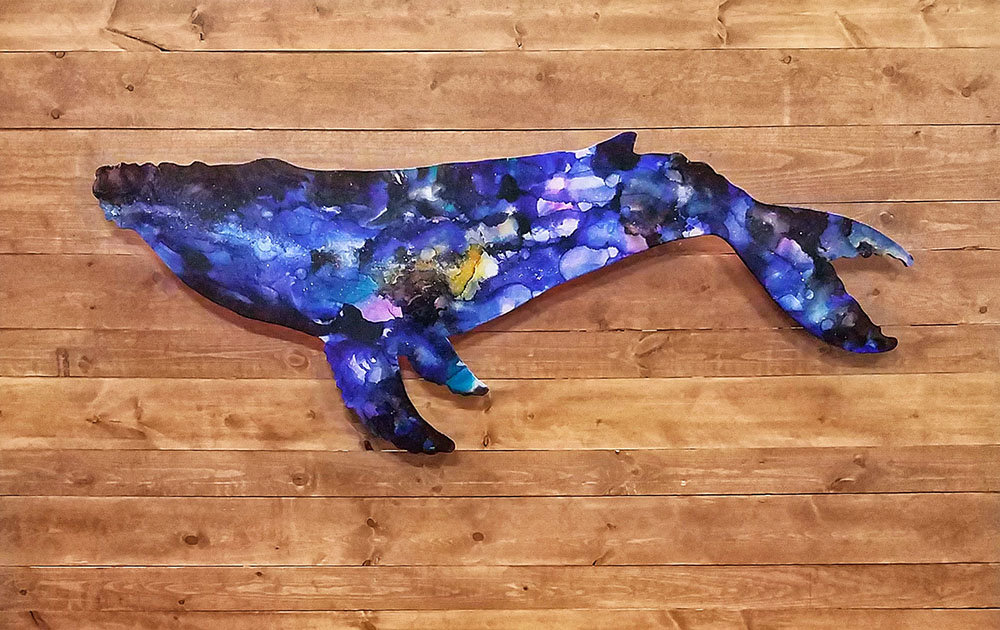 This whale shape that compasses a galaxy – custom made for a client – was Jess's introduction to using resin and a career changing project.

In 2019, her focus was on custom work, dressers and tables filled with art. A pivotal moment came when a client asked for a “Queen Headboard with a Whale and a Galaxy on it – no other rules, just that.” During her research for ways to make the Galaxy “pop”, Jess stumbled onto epoxy. “Working on the Whale Galaxy Bed was a ‘wow’ moment for me,” Jess said. “The possibilities exploded in front of my eyes after that first layer and what I could achieve with it.”

“One of my next projects was a 9' tall headboard that encompassed many ways of building and painting that are still, to this day, a trade secret singular to me,” Jess said. “I am able to use vibrant inks in a controlled fashion on wood to create outstanding river emulations. Combine that with epoxy and you have furniture that comes to life. It is ever-changing with the way light dances off them, tactile so you can feel the water beneath your fingertips, and visually engaging.”

Another key to perfecting the “Jess Style” was working with TotalBoat to create MakerPoxy, a high-end versatile epoxy resin for use in art and furniture design, which Jess uses for all her projects.

“Salmon Run” is a 9' tall queen headboard and live edge bed. The epoxy river runs diagonally up the headboard with 64 salmon “swimming” in it. Owners: Rich and Beth Ketterman.

"Meditate," a 24" x 48" coffee table, captures the beauty of Koi fish among lily pads and flowers. Stream cutout is filled with seven layers of epoxy.

Jess paints an octopus and line art on a wall control peg board panel to achieve a different look.

Normally, Jess handled 100 percent of her business, but as the business has expanded and her health declined, she has had to add some help. “My eldest daughter works for me part-time handling lifting and sanding, which has allowed me to work other tasks that require my full-time attention,” she explained. “As my teaching platform has grown, I have started to move away from taking every custom order and now only focus on ones that spark me.”

In 2019, Jess started on a small workbench in her garage with epoxy and woodworking. From there she started dreaming and planning her dream work space. In 2020, just before COVID-19, she started building her shop.

“Weekend at Bernies” is a 16' ft Maple countertop with a 6’ side wing, the original wave counter done in 2018 that resides at Bernies Bungalow in Anchorage. Four layers of epoxy and paint were used to create what was a jumping point for Jess’s epoxy career.

This 25' live edge Birch conference table was designed and built for the People of the Lower Kuskokwim Region and is owned by the Kuskokwim Native Corporation. It shows the 12 villages in their exact location along the Kuskokwim River.

“I decided to press through what 2020 ended up being and completed my 40' x 56' shop on my property in the late fall,” Jess said. “From custom ‘pouring’ workbenches made of UHMW to prevent the epoxy from sticking, to a dedicated ‘finish’ room, my shop is geared towards building effectively and being able to use epoxy at the same time.”

“Having Ehlers-Danlos means my life will always have concerns with longevity. That has made me so grateful for every second,” Jess shared. “ I have to say my overall goal remains the same as it was the moment I found out I was pregnant: leave my children something besides the history of my childhood; leave my girls a legacy of love and hope. Summing up what I hope for my future: I envision helping folks who have had a rough go mentally, physically, and everything in-between realize they can, in fact, become a skilled tradesperson.”

Thank you, Jess, for sharing your story of an artist/maker’s life lived courageously with the desire to help not only your daughters, but also others who are finding life a difficult journey.