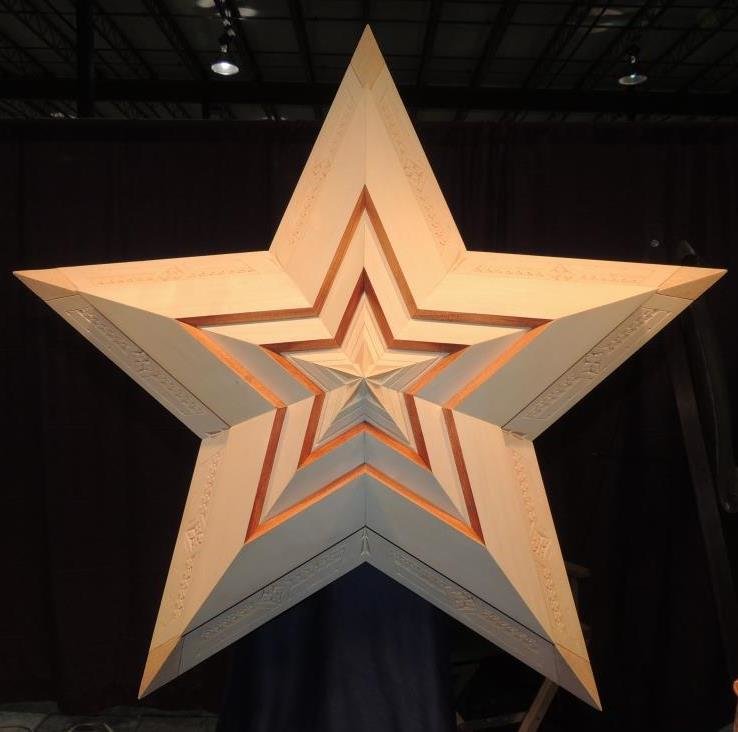 The Artistry in Wood Show in Dayton Ohio is one of the largest shows of its kind in the nation and is sponsored by the Dayton Carver’s Guild.  The artistic handcrafted talents come from more than half of the states in the U.S, and also from Canada.  Inside the Dayton Airport Expo Center, you will find more than 300 booths and 225 exhibitors.  It may take you at least the entire day to view it all.  So come for both days to enjoy the seminars, demos, drawings, education, and comradery each year on Veterans Day weekend.  There is a hands-on children’s woodworking area with many knowledgeable helpful instructors, and what event is not complete without good food!

Carving in all it’s many forms are not the only woodworking venue represented at this show.  You will also find woodturning, intarsia, furniture makers, box builders, basketry, frame and jewelry makers, as well as many other combinations of artisans and items all made from wood.  It’s quite a show that will leave you in amazement, as you ask yourself, how did they do it!

Hopefully you will leave with plenty of ingenuity to try your hand at it for the first time, or give you additional ideas to improve what you may already be doing in your shop.  In any event, you will find every artisan at the show willing to help, teach and inspire your inner creativity to become reality.  Most all items are for sale, and it’s a perfect place to acquire some fine holiday gifts, so be sure to bring your red Santa sack for the load home!  And if you’re a collector, you’ll be overwhelmed with the choices therein. 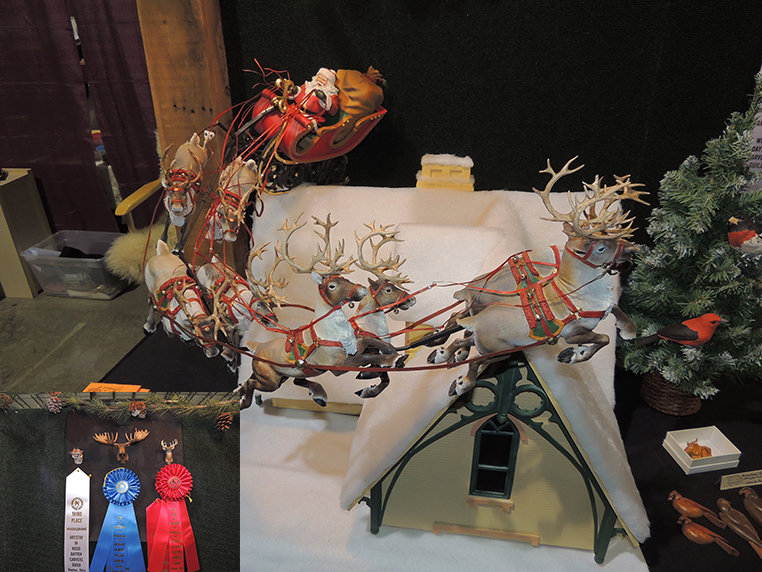 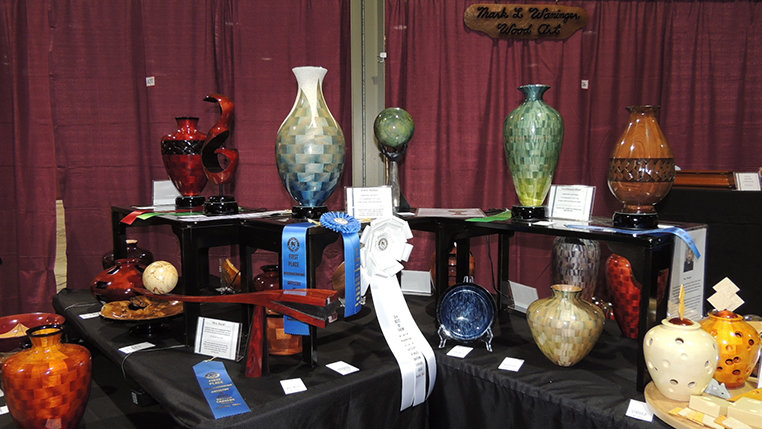 Proceeds from the show support the Dayton Ohio areas United Rehabilitation Services, which helps in the mission of enhancing the quality of life for children and adults with disabilities or other special needs.  Since A.I.W. began in 1981, they have contributed over $120,000.00 to charity.  This year’s attendance exceeded last years visitors by 300 for a total of 5400 guests, with proceeds of $5000 to be donated to the URS.  In addition, a contribution of $500 will be given to Partners Against Crime which teaches martial arts and self defense to kids ages 4 to 17, provides scholarship funds for continuing education after high school and presents opportunities for kids to give back to the community.

Best of Show in Carving was awarded to Charlotte (Charley) Phillips for her Basket/Flower carving (below). Charley is known for her intricate floral designs and female caricatures.  Previously an avid painter, she has been carving for almost 20 years.  Check her website for carving classes, scheduled in various nationwide areas. 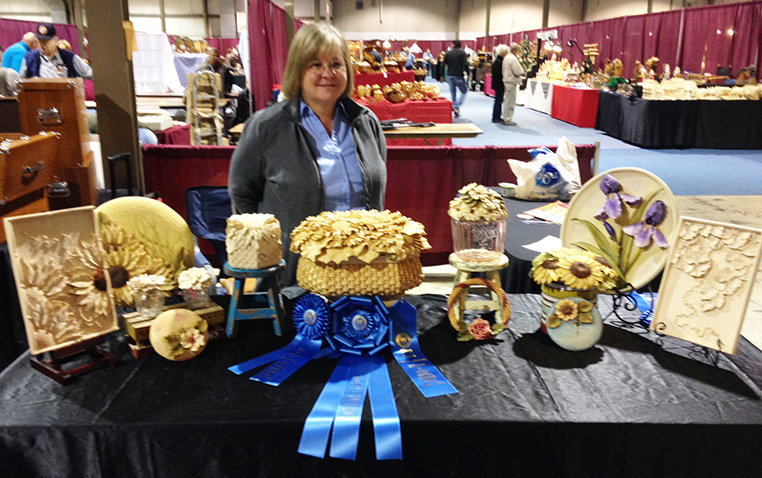 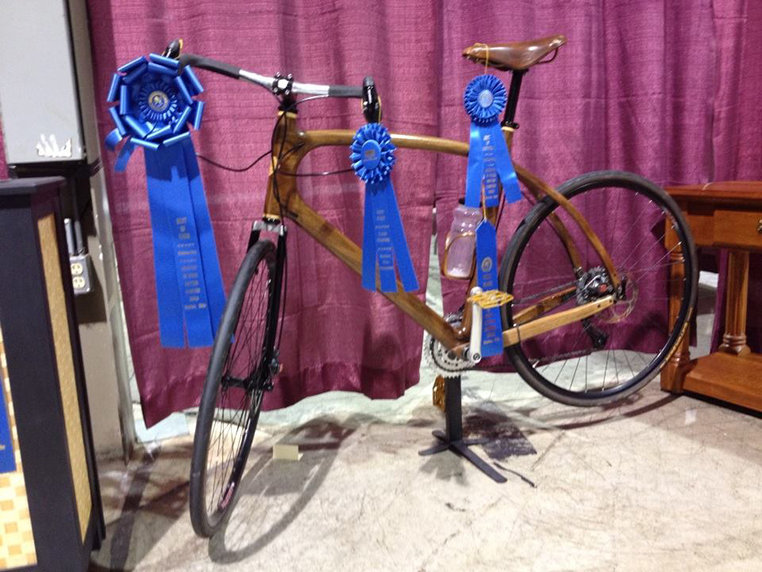 Best of Show in Woodworking

Jay Kinsinger earned the AIW ribbons for Best of Category, First in Woodworking and Best of Show for his wooden bicycle (left).  The forth ribbon is for best Floor Standing from WOW (Western Ohio Woodworking).  This is Jay’s 11th bike.  His first bike won best of show in AIW 2011.  He’s made tandems, folding travel bikes, a mountain bike and a special needs bike.  Jay explained, “I’m learning new skills and techniques with every bike I build.  This year’s bike is a cycle-cross bike, so it’s made for off-road, rough stuff.  The rear stays of the bike are steam-bent, laminated and have rather extreme curves which accommodate fat tires.  The walnut water bottle cage was fabricated using the same steam-bent & laminated technique.  The cage took more time to make than I’m willing to admit!  Yes we really ride them!  My 11-yr-old son and I pedaled the aforementioned tandem from the Gulf of Mexico (Mobile) to our home in Cedarville last summer.” 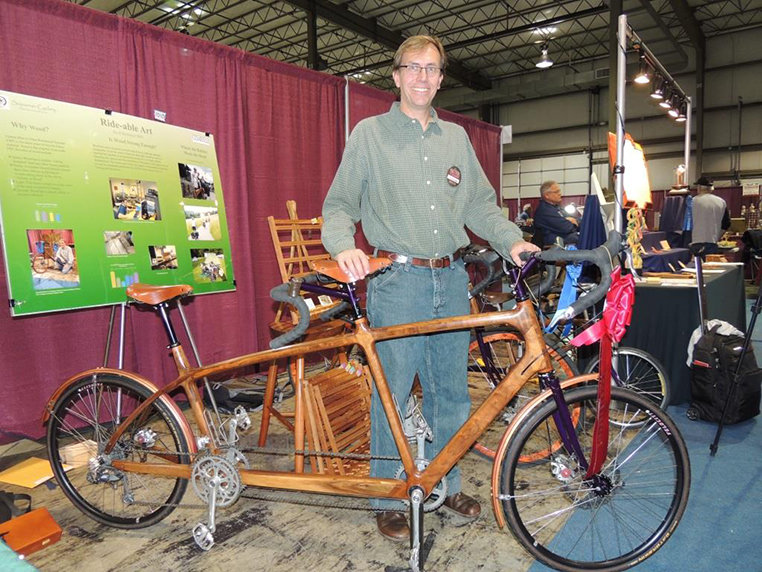 Photo right is with the tandem cruiser from Artistry in Wood 2012, where Jay placed 2nd Best of Show.

Here is a short video on how Jay creates the bikes…don’t blink!

Carver of the Year Award

Saturday evening, a fine dinner banquet is offered with woodworking prizes given out through a raffle drawing, and everyone in attendance receives a door prize.  Also at the banquet, the carver of the year award is named by Woodcarving Illustrated Magazine.  The 2014 winner was Rick Jensen.  Rick is a popular carver and instructor.  With Jack A. Williams, he co-authored The Illustrated Guide to Carving Tree Bark, and his work was featured in Carving Found Wood by Vic Hood and Jack A. Williams.  Additional inspiration and instructions are available on Rick’s DVD, Carving Magical Tree Houses.  Rick’s contact information is jrjensen@gra.midco.net or 218-281-5107 for more information. Many prizes are raffled off during the evening, one of which is a $500 Woodcraft gift card.  Bruce Henn was the lucky winner of this drawing!  He exclaimed, “Tell your Dayton store I’ll be in soon to use it!  Bruce started carving around the campfire in 1970 and still has his first rabbit carving.  Today, Bruce carves many different Caricatures, two which are never the same. 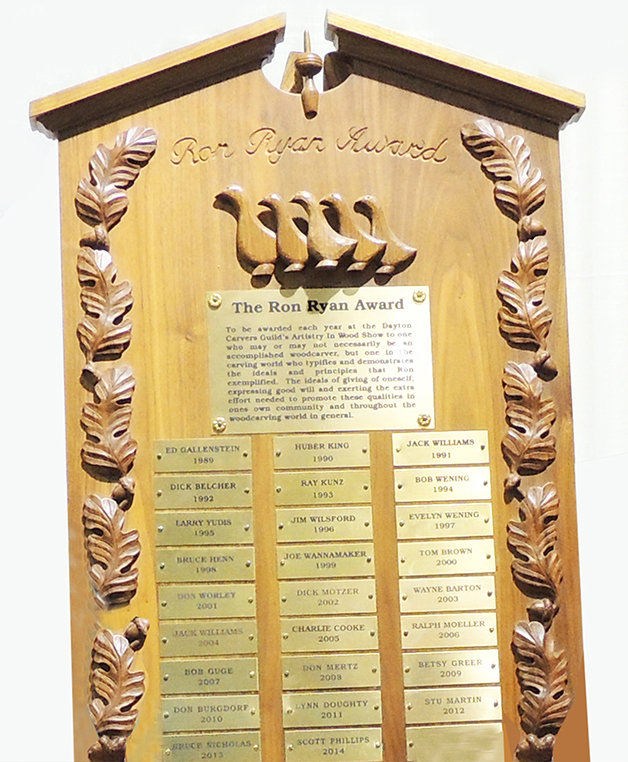 Additionally, the prestigious Ron Ryan Award is given each year to one who may or may not necessarily be an accomplished woodcarver, but one in the woodworking world who typifies and demonstrates the ideals and principles in one’s own community and the woodworking world in general.  The named winner’s plaque for 2014 was inscribed, “Ron Ryan Award; Awarded to Scott Phillips, who exemplifies the ideals of giving of oneself, expressing goodwill, and exerting the extra effort needed to promote woodcarving throughout the carving world.” 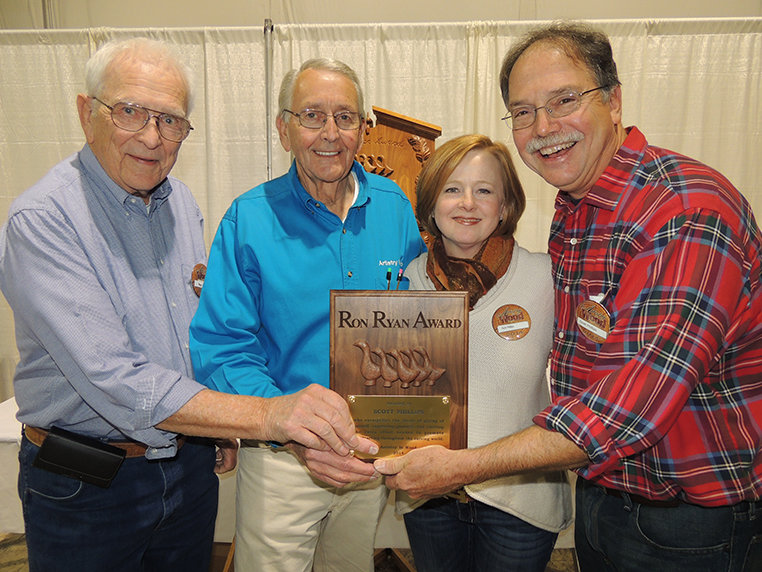 Woodworking Adventures was leaked the “highly classified” winners information ahead of time enabling us to capture this video unbeknownst to Scott that he was being chosen as this year’s recipient.  Watch as Scott’s surprise is unveiled and his heartfelt acceptance speech follows, as Guild member Don Worley presents Scott with the Ron Ryan Award, After the award was given, I couldn’t help but wonder who Ron Ryan was, what his involvement was with the Dayton Carver’s Guild, what he created, and why was his name associated with this award?
According to Ron’s wife Mary, Ron had passed away in 1989 at the very early age of 56 from cancer.  Together they have 5 children, 11 grandchildren, and 17 great grandchildren with more great grandchildren on the way!  Mary whimsically stated, “Ron was not really a carver you know, he followed me around watching me do all the carving!”  She added, “Even though I was the better carver, he did love carving Geese and giving them away, and everyone loved receiving them”, which is why the Ron Ryan Award has 5 stylized geese carved upon it, signifying Ron’s love of carving.
Ron & Mary Ryan 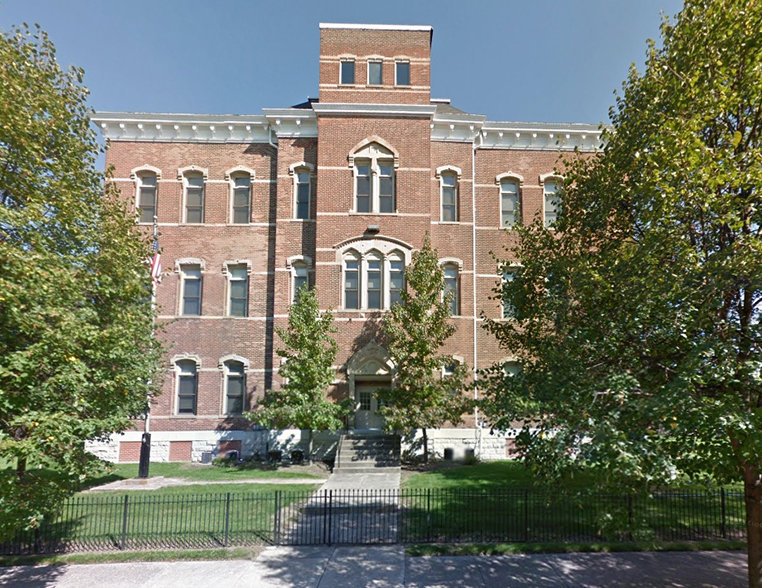 “Ron loved people, was a people-person, and was the kind of self-less individual that only wanted to help everyone”, Mary said.  “We both got involved in the (Dayton) Carvers Guild, Artistry in Wood, and I taught every so often at Woodcraft carving classes for 7 years at your Dayton store.  All those men and women at the Guild are fine people, and all about the continuation of future carvers and woodworking.  None of them are in it for themselves, or for any personal or monetary gain.  They do it because they love it and want to help the rehabilitation centers.”

Mary continued,“Ron would volunteer for anything, and he was a super planner and organizer.  You see, he was the youngest principal in the Dayton School system for the Huffman Elementary School that was ever chosen back in 1959 when he was only 26 years old.”  Ron also served as principal of Gettysburg Elementary School as well.  Ron picked up on woodturning too, but he loved to be around woodworkers even more.  So with his educational expertise, he became president of the Dayton Carvers Guild and also co-chaired the Artistry in Wood committee with Ray Kunz.”  After Ron’s passing, Ray was personally instrumental in setting up the award in Ron’s name.  Ray stated, “Ron was good honest people, enthusiastic about caring and to inspire others.  He saw the best in everyone, and even though he was not an artist, he liked being around the club.”

I hope you now have a better understanding of this award as I do.  With the connection of knowing Scott Phillips, I feel like I knew Ron as well, because Scott is a lot like Ron was.  Scott never has anything bad to say about anyone, is always upbeat, positive and invariably bringing out the best in people.  Most of all he appreciates what woodworking has done for him, so he passes it along every chance he gets.  Like Ron, Scott is a family man, and also does many things outside of woodworking for his community and for many others personally.

University, and knowledge in forestry, Scott helps maintain the Great Miami River in his community and has planted almost 40,000 trees, some of which have been planted in areas that did not sustain that process previously.  Every Spring and Fall, more trees will be planted to build and support a habitat where the trees create an environment that will restore the ECO system.  The circle of life will be assisted as the trees create oxygen, provide a pure water shed system with stream bank filtering, restoration, and provide a natural habitat for wildlife, making everyone’s life richer.

According to Scott, he wishes his legacy to not only be woodworking, but most of all, for this restoration program which is just starting to bring back wildlife consisting of eagles, bucks, swans, beavers, hawks, falcons and over 50 other species of birds.  Forestry is defined as the science, art, and craft of creating, managing, using, conserving, and repairing forests and associated resources, in a sustainable manner, to meet desired goals, needs, and values for human benefit.  Scott is about all of that.

Each year he demonstrates woodworking at AWFS, IWF, WIA, AIW shows, and many more.  Scott’s contribution to woodworking is mostly through his American Woodshop PBS educational program where he gets to have fun in sharing the growth and continuation of woodworking by showing how to make just about anything from wood.  But where he truly makes an impact in woodworking is through making and building relationships with inspiration that comes from his heart and soul.

Additionally, Scott travels nationwide each year as a steward for Woodcraft, supporting the stores to personally visit and teach woodworking.  With his wife Suzy now beside him in the shop (which he loves immensely), they share every woodworking adventure together while increasing our knowledge with unbelievable motivational energy.  No matter our level of expertise, Scott teaches us to never give up on any project or piece of wood, while always using our wood commodity with the least amount of waste possible.  Scott’s motto has become, “It doesn’t get any better than that.”  Well Scott, we just have to say, “It doesn’t get any better than you!”  Thanks for all you do.

So with that being said, we congratulate Scott on a job well done, and on his Ron Ryan, well deserved award.  As long as people like Scott, and all those involved at the Dayton Carvers Guild, Artistry in Wood, and woodworkers everywhere continue to learn, create, and pass along their knowledge to the next generation, then woodworking will live long and prosper.

Head to your shops, make some sawdust, and we’ll catch you on the next Woodworking Adventure!
auf Wiedersehen!…Frank