Co-Hosts Scott and Suzy Phillips Reclaim, Recycle and Upcycle in Season 24 of The American Woodshop 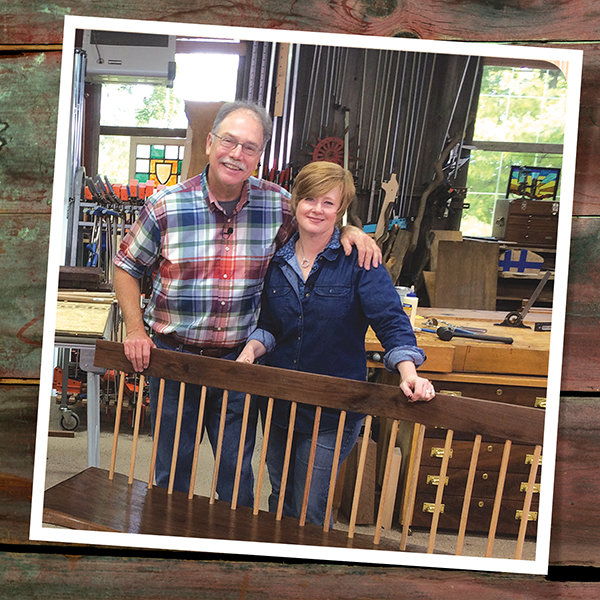 Co-hosts Scott and Suzy Phillips display the Shaker-inspired Spindle Bench from the first Season 24 Episode of The American Woodshop on PBS.

Co-hosts Scott and Suzy Phillips will show The American Woodshop viewers easy, affordable ways to make furniture and decorative art for their homes in the 13 Season 24 shows that will begin airing on Saturday, January 14, 2017. Check your local PBS station for airtimes.

“Woodcraft is pleased to be a sponsor for The American Woodshop,” Jody Garrett, Woodcraft president, said. “Scott and Suzy Phillips continue to offer fresh, new projects that help woodworkers build their skills, while making furniture and decorations they will be proud to show off in their homes.”

Scott has been “working with wood in every imaginable way” for 50 years, beginning in his father’s shop in 1966. Along the way, Suzy joined him in the woodshop and now offers carving and scrolling techniques that are easy to understand and duplicate.

“Makers are dreamers,” Scott and Suzy said. “They imagine possibilities and experiment.” In Season 24, Suzy and Scott combine the best open-minded blend of old and new mediums, including the union of wood, glass and metal in an artful way to decorate interiors and garden spaces.

The co-hosts have chosen reclaimed, recycled and upcycled materials for their projects, which they will create using affordable tools and safe techniques. “Working creatively with found materials is extremely rewarding. It starts when you pick up old wood and give it new life,” Suzy said, and Scott added, “Sometimes recycled and reworked to look new is the best path. Other times keeping the patina of aged wood tells a better story. But the choice is in the hands of the maker.”

Season 24 projects include the following:

For more information about The American Woodshop, visit www.wbgu.org/americanwoodshop/index.html and www.facebook.com/The-American-Woodshop-1461759564084237/timeline/.

We hope you'll be inspired!